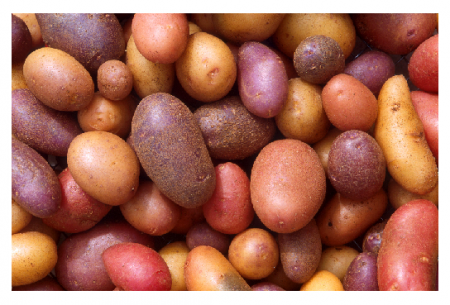 In modern times, we have a tendency to associate potatoes with Ireland, due in great part to the famine, caused largely by potato blight that afflicted that country from 1845-1852. But the history of the word “potato” itself reveals that this association is relatively recent. The potato has a rich and geographically diverse history, which its name reflects.

The plant with the scientific name Solanum tuberosum, which is commonly called the potato, is believed to have its origins in South America, specifically in Chile. The English word “potato” comes from the Spanish patata. Patata itself is a combination of two words: the word papa from the South American Quechua family of languages, and batata, from the language of the Taino, who populated Haiti when the Spanish arrived there. Information about the exact trajectory of the word seems to be fuzzy as the details vary a bit from source to source.

But sources agree that while the Quechua papa referred to Solanum tuberosum (a member of the nightshade family), batata referred to what we now call sweet potatoes, or Ipomoea batatas, which are related more closely to morning glories than they are to Solanum tuberosum. It seems that, encountering the two crops in the New World, either the Spanish colonists, the English colonists, or both began to confuse the two with each other and to refer to them interchangeably.

Hence, both patata and potatocame to refer to Solanum tuberosum. In the 16th century, an herbalist named John Gerard distinguished Solanum tuberosum as “bastard potatoes” or “Virginia potatoes,” and designated Ipomoea batatas as “common potatoes.” But eventually, probably because of the rapid spread of the crop across the world and its eventual importance in many economies, the word “potato” was appropriated for Solanum tuberosum, and Ipomoea batatas became the species that needed a qualifier, hence the term “sweet potato.”

To complicate things even further, we can add a third species of tuber to the discussion- yams of the genus Dioscorae, whose varieties include Dioscorea rotunda (white yam) and Dioscorea cayanensis (yellow yam). In the United States, sweet potatoes and yams are often referred to interchangeably.

This seems to have happened because enslaved Africans confused ipomoea batatas with the tubers that grew in their homeland, which were called in Portuguese inhame, thought to be derived from nyami, which in Senegal means “to eat.” In English this was shortened to yam, which eventually came to refer to both species. However, the U.S. Department of Agriculture mandates that all ipomoea batatas that are labled “yams” also be labeled “sweet potatoes.”