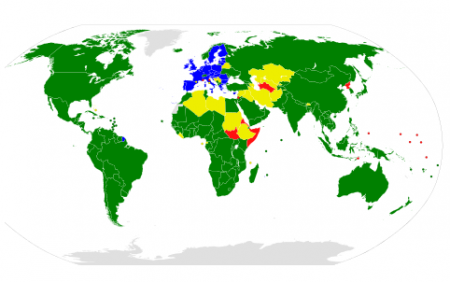 World Trade Organization (WTO), Director-General Roberto Azevêdo in his address at the opening session of the Third International Conference on Financing for Development, in Addis Ababa, argued that major gaps exist in the provision of trade finance particular among countries in Africa and Asia.

He urged development partners to address some of the imbalances and noted the devastating effect that lack of support can have on these countries.

He pointed to the fact that strong trade support for these countries can help to bring in new investment, create jobs, and provide access to technologies.

“Trade has the power to be an important driver of development, especially when it is paired with the right financing and capacity building assistance,” he posited.

He argued that the goal to cut poverty has been on track and posited that the reduction in poverty came from economic growth in developing countries — which was driven, in part, by trade.

“Developing countries’ share of global trade has jumped from 28 to 42 per cent over the last two decades. In this way, trade has proven its potential in delivering gains for development,” he said.

He further noted that the WTO’s Aid for Trade initiative has disbursed more than 245 billion dollars to date as part of its initiative to help developing and least-developed countries to improve their trading ability.

He stated that partnership encompassing an Enhanced Integrated Framework have placed particular focus on Less Developed Countries (LDCs) and called for partners to provide the necessary support to this initiative.

He stated further that the 2013 historic Bali Package agreement has provided practical support and help to LDCs. This includes streamlining border procedures to dramatically cut the costs of trade while at the same increasing customs revenues and create jobs numbering 18 million in developing countries alone.

However, he lamented the fact that the benefits of trade still do not reach some of the poorest and most vulnerable. He argued that providing more trade opportunities is not enough and called for a broader and more systemic approach.

“This is why financing for Development, and the whole post-2015 debate, is so important. We have identified trade finance as a key issue here. Up to 80% of global trade is supported by some sort of financing or credit insurance,” he added.

Azevêdo further argued that developing countries are still suffering from the consequences of the 2008 crisis and noted that the supply of credit has not yet returned to normal levels. He cited the fact that in many cases the domestic financial system is less than adequate and with that comes big financing gap, and one sees this, particularly in Africa and Asia.

“The estimate for the value of unmet demand for trade finance in Africa is between 110 and 120 billion dollars. By bridging this gap, we would unlock the trading potential of many thousands of individuals and small businesses across the continent. The smaller the business, the bigger the gains. In Asia, the unmet demand for trade finance is estimated at over 1 trillion dollars,” he continued.

This, he said, has all too often resulted in missed opportunities for growth and development.