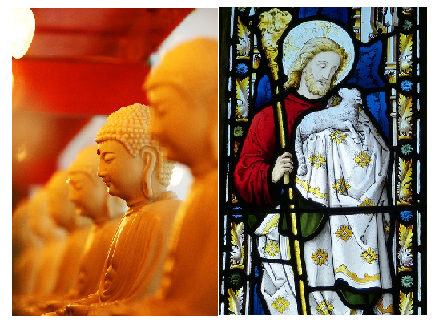 Throughout the ages religious leaders have left their impact on the world and none more so than Jesus and Buddha. Kenneth R. Samples, writing on reasons.org had this to say:

Among the world’s great religious leaders, only two had such a profound impact that contemporaries inquired as to the very nature of their being.1 People wondered whether Siddhartha Gautama (the Buddha) and Jesus of Nazareth (the Christ) were more than mere human beings. While both are known as great teachers and profound souls, the identity, mission, and message of these two men couldn’t be more different.

Like Christianity, the religion of Buddhism is traced to a single individual. That person is Siddhartha Gautama (c. 563–480 BC). While mixtures of myth and legend make it impossible to completely reconstruct the life of the Buddha, there is a historical core of information known about him.2

Siddhartha was born into the Indian Sakyas clan in the sixth century B.C. in Nepal, near its border with India. Siddhartha’s father was the feudal lord of the Sakyas people and created a life of luxury for his son. Siddhartha is said to have had three palaces with 40,000 dancing girls at his disposal. He received a cultured education that included studies in the arts, warfare (martial arts), and philosophy. He later married a neighboring princess and they had a son together.

Siddhartha gradually grew discontented with his life of affluence and hedonism. Upon taking a chariot ride into the city, he encountered the “Four Passing Sights” (an old man, a diseased man, a dead man, and a monk). These sights represent Siddhartha’s first glimpse of human misery and they profoundly impacted him. For the first time, he began to reflect upon the problem of suffering. At age 29, he renounced the pleasures of the princely life, left his family and privileged position behind, and became a truth-seeker. He wanted to uncover the causes and cure of the universal problem of human suffering.