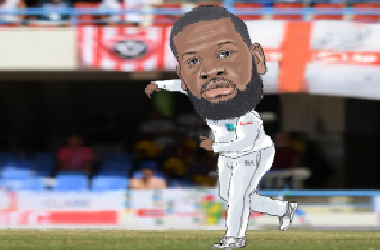 The comments made by legendary former West Indies off-spinner, Lance Gibbs, while speaking on Mason and Guest sports program has brought to the fore West Indies’ drought in producing excellent spin bowlers.

The 85-year-old Gibbs lamented the lack of spin bowlers and was particularly critical of the much-heralded Antiguan spin bowler Rahkeem Cornwall.

Gibbs made it clear that he was not impressed with the current crop of spin bowlers in the Caribbean.

Posed with the question of whether he has seen any off-break bowlers in recent times who have caught his eye, Gibbs proffered, a resounding, “No!”

“They’re not spinning the ball,” he said.

Now, over the last decade, the Windies has won two T20 World Cups in 2012 and 2016. Apart from that, their cupboard is bare, and there is not much else to celebrate.

In the 2015 World Cup, they reached the quarterfinals. However, in 2019 they finished almost last in the competition — they won two matches from nine and was one position above Afghanistan when the dust was all settled.

Pundits have put forward many different reasons for Windies’ below-par performance, but my take among others is — the lack of an excellent spinner!

In my opinion, Windies will not perform well as a team until they can produce at least a quality spinner. Gone are days when all that was required was a four-prong pace attack.

Unfortunately, today, Windies does not even have a good two-prong.

And in recent years, Windies’ spinners have not been at their best. No one has stepped up to the plate and take a leading role.

Let us look at the last three major ICC tournaments.

At the 2016 T20 World Cup, which Windies won, Samuel Badree and Sulieman Benn were their main spinners. Badree picked up nine wickets while Benn got two wickets and that played a part in the team lifting the World Cup trophy.

At the 2017 Champions Trophy, Windies did not even qualify to play the event. They were ranked 9th at the time of qualification.

Can you imagine, the two-time World Cup winners, and winner of the 2004 Champions Trophy, not being part of the 2017 edition?

At the 2019 World Cup, Windies’ main spinner was Ashley Nurse. He played just four matches and was not able to pick a single wicket.

Indeed, a team cannot perform well in big tournaments without their spinners performing well. Nurse did not perform well, and since then, he has not played for Windies.

In the longer format of the game, Windies’ showing is also appalling.

In the last three years, they have relied heavily on the services of Roston Chase, a batting all-rounder, for their spin attack.

Last August, the Windies got beaten 2-0 in their backyard by India.

One of their better showings was against Afghanistan, where they won a Test match in which their spinner in chief Rahkeem Cornwall took 10-wickets in the game.

Although Windies have tried spinners on numerous occasions, no one has stepped up to the plate — wicket!

Consequently, Windies has relied on their big-hitting batsmen to get them out of trouble time and again.

No spinner seemed to cement his place in the team. Sunil Narine does not play for the National team; other spinners are not consistent. So, how is the team supposed to be at the top of the rankings?

Windies must find a good, quality, long-term spinner. Isn’t it strange that almost every team has a strong spin bowling department and Windies none? Look at the Indian team. Ashwin and Jadeja have won matches for their team on numerous occasions on their own. Nathan Lyon is always among the wicket-takers whenever Australians take the field.

In the longer format, it seems that Windies will find the services of Rahkeem Cornwall useful. He, along with Roston Chase, may prove their worth, but one can only be hopeful.

However, in the shorter format, I wouldn’t hold my breath.

Indeed, the team needs spinners desperately. Sunil Narine is an excellent option, but he has shown no appetite for the game at the Windies level.

Youngsters need to step up their game. Therefore, opportunities must be given to youngsters like Hayden Walsh and Fabian Allen.

The T20 World Cup is around the corner, and Windies need to find the perfect combination of power-hitting and bowling that will put them in good stead to defend their title.