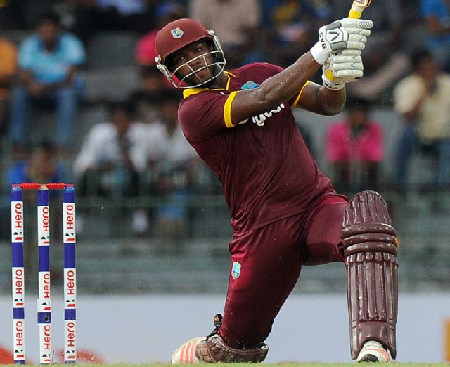 Johnson Charles at age 27 has been around the West Indies cricket setup since 2008. However, he has been in and out of both his home and West Indies team over the period.

At the same time, many cricket pundits have argued that Charles should be further ahead in his cricketing career given his tremendous potential.

The St. Lucian born Charles is only the second cricketer from that part of the Caribbean to play for the West Indies — the first was former West Indies captain Darren Sammy.

Charles is an opening batsman of no mean order who also don the gloves at times as a wicket-keeper. He made his Twenty20 debut in domestic cricket January 2008 — in the now defunct Stanford T20 tournament which was started in the Caribbean in August 2006.

He later moved on to make his West Indies Twenty20 International (T20I) debut against England in September 2011 and One Day International (ODI) against Australia in March 2012.

However, the truth is Charles has not acquitted himself well over the period neither for the West Indies nor his local team, Windward Islands. His unflattering career statistics would make the average cricket fan cringed.

In fact, Charles was once described by an ESPNCricinfo commentator as having “little obvious pedigree as an opening batsman.” Needless to say, he went on to help West Indies win the match against England.

Because of Charles vast potential as a devastating opening batter, the West Indies selectors have kept faith with him until now.

The truth is West Indies has struggled over the years to find a pair of good opening batsmen, and this has placed them in the unenviable position of always playing catch up in putting a reasonable score on the board at the start of an inning.

Over the past season, however, Charles seems to be raising his bat as if to answer the question that parallels the Biblical line — “Also I heard the voice of the Lord, saying, whom shall I send, and who will go for us? Then said I, Here am I; send me.”  (Isaiah 6:8)

In his recent T20I outing against India in a two-match series, he was brutal, hitting the ball outside the park at will, thus scoring 79 and 43 respectively in the matches. He has also posted an average of 47.1 in the recently concluded CPL T20 League with a highest score of 94 not out. In his last ODI game, he scored 45 against Australia.

There is no doubt that Charles has been in stellar form since the ICC World T20 2016 Championship. He has managed to carry over his good form in almost every format of the game since then.

Now, with the West Indies up against the wall in finding someone to partner Kraigg Brathwaite at the top of the innings in Test cricket, one could argue that the time is perfect for Charles to be slotted into the West Indies Test team as one of the opening batsmen.

The fact of the matter is West Indies has nothing to lose in unleashing Charles on the Mitchell Starc or Saeed Ajmal of this world.

Truth be told, Windies selectors have already experimented with different batters at the top who have no credentials as opening batsmen; however, they have failed to inject an opening batter of note and experience at the top — Johnson Charles.

No doubt, the question that may readily be asked, will Charles make a difference?  Perhaps not, but certainly he cannot do worse than those who have been tried before.