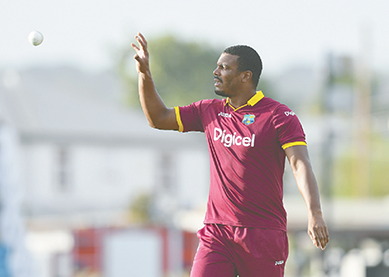 Shannon Terry Gabriel, a native of Trinidad and Tobago burst on the cricket scene when he made his debut for his country in January 2010, as a 22-year old.

He played his first game back then against the Leeward Islands in the 2009–10 Regional Four Day Competition.

He picked up two wickets for 46 runs in the match as his contribution in helping Trinidad and Tobago to win the match by 45 runs.

He subsequently played two additional first-class matches that season, finishing with four wickets at a cost of 39.75 runs each.

After playing only three first-class matches, he was fast-tracked by the selectors to play in the West Indies A team against Zimbabwe.

Although picking up only two wickets in the second innings, he created a marked impact on the game as he remained economical throughout the match.

Gabriel went on to play 14 first-class matches for Trinidad and Tobago in the 2010-11 and at the end of the season boast a haul of 33 wickets.

The fiery fast bowler best outing for his home country came against Combined Campuses and Colleges, where he picked up 7 wickets in the match.

The young, strapping, and exciting pacer was then picked for the 2011 Champions League T20 competition.

He later made his Test Match debut for the West Indies May 2012, against England at Lord’s cricket ground.

He was impressive on his debut picking up 4 wickets for 86 before back pain forced him to return home.

Gabriel played in the inaugural Caribbean Premier League 2013 for Barbados.

His November 2013 outing for the West Indies against India was unimpressive, so too was his tour game against New Zealand.

Since then, Gabriel has struggled with fitness and injuries. His last test was against Australia and his less than stellar performance did not gain him any points among commentators and pundits alike.

The 28-year-old made his One Day International against Australia in the current Tri-Nations Series on June 21, 2016, and he is once again being touted as a gem among Windies quicks.

Gabriel bowled with sustained deadly pace to trouble the Aussie batsmen as he finished with one for 43 from his nine overs, in the eighth game of the competition.

“We didn’t start very well with the ball. I think Jason (Holder) had two overs for [22 runs] before he went off …but another good thing we can take from [this game] is how Shannon bowled on his debut, Simmons told reporters.

“To have somebody in the 150s (mph) so regularly it’s great to see,” added Simmons.

Gabriel’s express, fast, and furious speed has got people talking ever since he appeared in his first match until now.

Some people also hold the view that he should have been further along in his cricket path than his current status and record show.

“Gabriel has the pace and height to trouble batsmen but he has to work on consistency to claim a long tenancy in the West Indies pace bowling attack,” noted one cricket writer.

Will Shannon Gabriel blow the trumpet in terms of his bowling performance to ushering West Indies rise again to the top? Windies cricket fans are no doubt waiting to exhale!