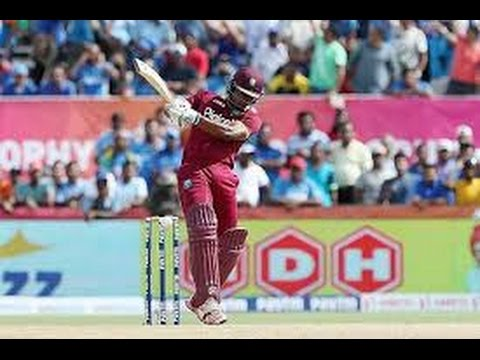 Batting like a man possessed, Windies opening batsman Evin Lewis went berserk as he plundered Pakistan’s bowling attack to put his team in winning position for the first time in the penultimate match of the T20I series.

The Trinidadian-born 25-year old left-handed batter was unstoppable as he smashed his way to 91, scoring nine sixes and five fours from just 51 balls on his home ground.

Earlier, Pakistan skipper Sarfraz Ahmed won the coin toss and elected to bat first; however, they could only manage to post a paltry total of 137 for the loss of eight wickets in their allotted 20 overs.

The top scorers for Pakistan were Kamran Kaml and Babar Azam who scored 48 and 43, respectively, while the pick of Windies bowlers was Samuel Badree with two wickets for twenty-two off four overs.

The West Indies started their innings shakily, losing opener Chadwick Walton for a mere single to Sohail Tanvir in the second over of the innings with just a couple of runs on the board.

However, good sense prevailed as a 56-run stand for the second wicket between Lewis and Samuels brought some stability to the innings.

Samuels supported well before he was undone in the eighth over by Wahab Riaz for 18.

Debutant Jason Mohammed joined Lewis at the crease at the departure of Samuels, and he too supported well.

Lewis continued to wreak havoc until he was out, caught by Wahab Riaz off the bowling of Shadab Khan.

At the fall of Lewis’ wicket, incoming batsman Lendl Simmons blasted four runs to not only give the Windies a well-deserved victory but also keep the series open.

Windies Captain Carlos Brathwaite told the press that he was “Very pleased with the energy, passion, and fire. Everyone fought till the last ball. They looked good for 160 and to keep them down to 130-odd was great. It was a fantastic effort with the ball and then the way Evin Lewis played, even Jason Mohammed who showed great maturity on debut. We will come out tomorrow and look for a series draw. There will be more intensity and heat. We will look to recover and come back and do what is required of us. We will look to do even better and draw the series.”

On the other hand, Man of the Match Evin Lewis said, “I’m very happy. Unfortunately, first two games, I got run out. I wanted to get a good score in this game and I got a good score.”

He also added, “I got a good start for the team and converted it. I have been putting in extra practice at the nets and that seems to be working.”

At the same time, Pakistan’s Captain Sarfraz Ahmed noted that his team did not put up a good total and concluded, “Today was not our day, but credit to West Indies. Evin Lewis played really well.”