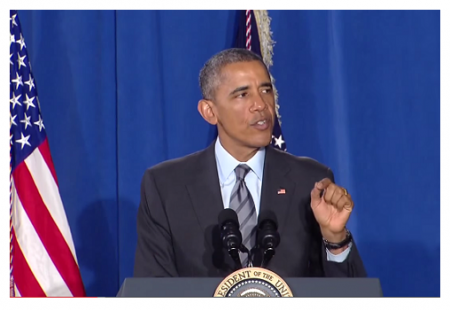 President Obama in his weekly address argued that since the U.S. economy is now growing and businesses are creating jobs at the fastest pace since the 1990s, and wages are starting to rise again, choices must be made about what kind of country we would like the U.S. to be.

He declared that his State of the Union Address was focused on middle-class economics and underscored the point that the U.S. does best when everyone gets their fair shot, everyone does their fair share, and everyone plays by the same set of rules.

He stated further that the budget he will be sending to Congress in the coming week will be one built on those values.

“We’ll help working families’ paychecks go farther by treating things like paid leave and child care like the economic priorities that they are.  We’ll offer Americans of every age the chance to upgrade their skills so they can earn higher wages, with plans like making two years of community college free for every responsible student.  And we’ll keep building the world’s most attractive economy for high-wage jobs, with new investments in research, infrastructure, manufacturing, and expanded access to faster Internet and new markets,” the President said.

President Obama noted that since he took office, the deficits have been cut by about two-thirds – the fastest sustained deficit reduction since just after the end of World War II.

“We just have to be smarter about how we pay for our priorities, and that’s what my budget does.  It proposes getting rid of special interest loopholes in our tax code, and using those savings to cut taxes for middle-class families and reward businesses that invest in America.  It refuses to play politics with our homeland security, and funds our national security priorities at home and abroad.  And it undoes the arbitrary, across-the-board budget cuts known as “the sequester” for our domestic priorities, and matches those investments dollar-for-dollar in resources our troops need to get the job done,” he said.

He posited that he knows that there are Republicans in Congress who disagree with his approach. He said however that he welcomes any ideas proffered by them that will help provide economic security for middle-class families.

“That’s the way the middle class thrived in the last century – and that’s how it will thrive again,” the President concluded.