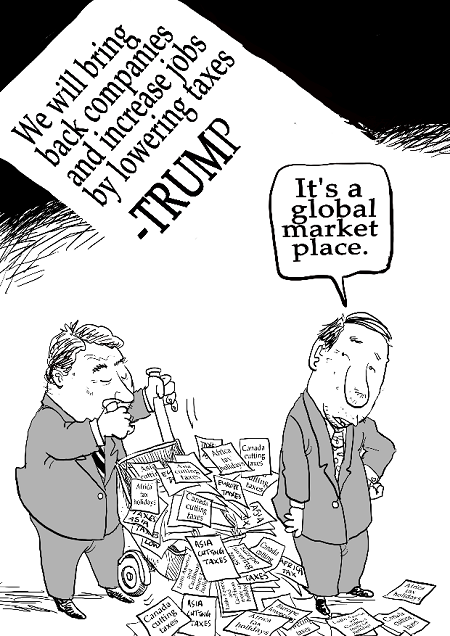 President Trump has touted his tax cuts as the best thing since sliced bread and no doubt, it is for the haves, but not the have-nots.

The fact of the matter is the new U.S. tax cut policies are not the only game in town as other countries are bound to react to make themselves competitive.

So, let the global economic game begin as countries seek to make their strategic moves.

Already, China is positioning itself to avert any adverse effect the U.S. tax cuts will have on its economy.

It is reported that the People’s Bank of China has created a plan that is ready to deploy a combination of tools — higher interest rates, tighter capital controls and more-frequent currency intervention — to keep money at home and support the yuan.

An official involved in Beijing’s deliberations called Washington’s tax plan a “gray rhino,” an obvious danger to China’s economy that shouldn’t be taken for granted. “We’ll likely have some tough battles in the first quarter,” the official reportedly said.

Germany, with its average effective corporate tax rate at roughly 30%, compared with 20% in the U.K. and 12.5% in Ireland may currently be forced to act considering what now obtains in the U.S.

The U.S. Closest neighbor to the north, Canada, may now have no choice but to respond to the American average combined federal-state rate of 26 percent.

The truth is the new tax move by the Trump’s administration has forced other countries to act not only to protect their economy but also to remain competitive in a new global competitive environment.

Time will tell whether Trump has drawn a bad card in cutting taxes in an economy already doing well with unemployment hovering at 4 percent.