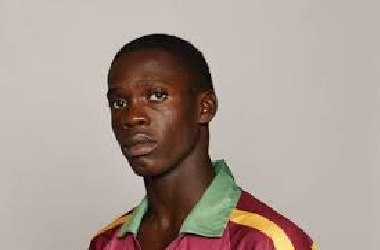 Nicholson Anthony Gordon, the 30-year-old Jamaican right-arm fast bowler, has recently popped up again on the cricketing radar with a devasting piece of fast bowling that ripped the heart out of the Irish batters in their encounter against Jamaica in a warm-up match.

Ireland lost by five wickets to the Jamaica Scorpions when the dust was all settled.

The match was in preparation for the Irish forthcoming three-match ODI series with the West Indies at Sabina Park.

The October-born Gordon made his debut for the Jamaican national side in January 2016.

Gordon, who hails from Petersville District near Whitehouse in Westmoreland, honed his cricketing skills early at New Hope Primary and Junior High, a school that has produced Test cricketer Jermaine Blackwood and Jamaican players such as Derval Green and Jason Dawes.

Gordon represented the team at the 2010 Under-19 World Cup in New Zealand the following year.

He appeared in four of his team’s matches, including the semi-final loss to Pakistan, but failed to take a wicket at the tournament.

Gordon made his senior debut for Jamaica in the 2015–16 Regional Super50 tournament against ICC Americas.

He took 2/17 on debut and played another two games before being dropped.

Later in the season, Gordon also made his first-class debut, playing matches against Barbados and the Windward Islands in the 2015–16 Regional Four Day Competition.

For years, the Jamaica Scorpions pace bowler bided his time on the sidelines, getting the odd chance here and there but was never given a sustained run so that he could settle into a groove in the local cricket setup.

And last season, the former West Indies Under-19 representative featured in five of the Scorpions’ opening six matches, tallying 17 wickets at an impressive average of 19.47.

Gordon has had 3 five wickets haul thus far and best bowling figures of 7 for 70.

In bowling fast, he singled out Barbadian fast bowler Fidel Edwards as his inspiration.

Gordon said in a press interview, “I always spend time back home doing my thing — I call it hide and train. I like to spend time by myself doing strength work and stuff like that. I always set myself to do extra work. When I get out people say, ‘Boy, you are fit and strong,’ but it is the work that I am doing back at home.”