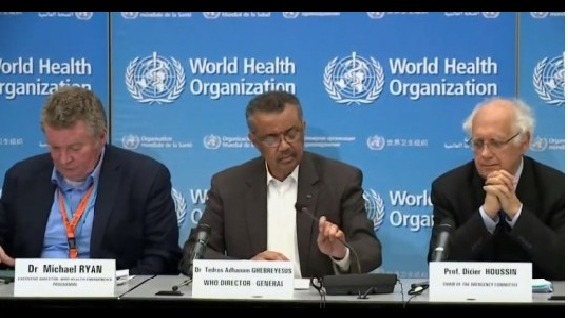 The World Health Organization (WHO) has declared that the rapid spread of the coronavirus affecting more than 8,200 people across the world is a global health emergency — a rare designation that helps the international agency mobilize financial and political support to contain the outbreak.

The announcement comes just hours after the U.S. confirmed its first human-to-human transmission of the virus, which has killed more than 200 people in China and has now spread to at least 18 other countries.

WHO chief Tedros Ghebreyesus said the main reason for the declaration is not what is happening in China, but the spread of the coronavirus to countries with weaker health systems.

“We don’t know what sort of damage this virus could do if it were to spread in a country with a weaker health system. We must act now to help countries prepare for that possibility. For all of these reasons, I’m declaring a public health emergency of international concern over the global outbreak of novel coronavirus,” said Ghebreyesus.

Since emerging less than a month ago in Wuhan, China, the coronavirus has infected more people than the 2003 SARS epidemic, which sickened roughly 8,100 people across the globe over nine months. As of Thursday, there are at least eight cases in four countries, outside of China, of human-to-human transmission of the new coronavirus.

The WHO said there had been 98 cases in 18 countries outside of China, but no deaths.

There have been eight cases of human-to-human infection — in Germany, Japan, Vietnam, and the United States.

Dr. Ghebreyesus described the coronavirus as an unprecedented outbreak that has been met with an unparalleled response.

WHO defines a global health emergency, also known as a “public health emergency of international concern,” as an “extraordinary event” that is “serious, unusual or unexpected.”

“Our greatest concern is the potential for the virus to spread to countries with weaker health systems and which are ill-prepared to deal with it,” Tedros said.

“To the people of China and to all of those around the world who have been affected by this outbreak, we want you to know that the world stands with you,” Tedros said. “We must remember that these are people, not numbers.”

In the meantime, the Centers for Disease Control and Prevention (CDC) notes on its website that human coronaviruses are common throughout the world.

It also states that there are seven different coronaviruses that scientists know of that can infect people and make them sick.

Some human coronaviruses the site says were identified many years ago, and some have been identified recently.

Where Do Coronaviruses Come From?

CDC also states that coronaviruses are common in many different species of animals, including camels and bats. Rarely, these coronaviruses can evolve and infect humans and then spread between humans. Recent examples of this include SARS-CoV and MERS-CoV.

Most coronaviruses infect animals, but not people. In the future, one or more of these other coronaviruses could potentially evolve and spread to humans, as has happened in the past.

We still don’t understand why only certain coronaviruses are able to infect people.

How to protect yourself?

CDC states that there are currently no vaccines available to protect one against human coronavirus infection and proffers the following to reduce risk of infection:

Wash your hands often with soap and water for at least 20 seconds.

Avoid touching your eyes, nose, or mouth with unwashed hands.