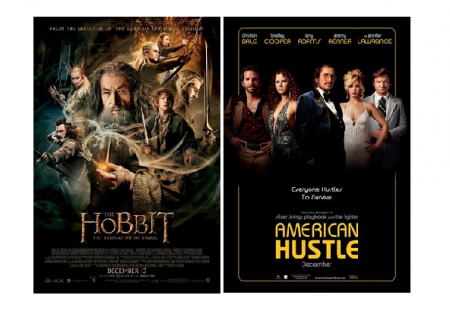 Moviegoers will find a lot of movies to choose from during this holiday season. Some of which include the following:

1. The Hobbit: The Desolation of Smaug – This film continues the adventures of the title character Bilbo Baggins as he journeys east with his companions. Their quest is to reclaim the lost Dwarf Kingdom of Erebor. Intriguing, interesting, and lots of suspense!

2. Anchorman 2: The Legend Continues – According to the New York Times’ A.O.Scott, the “Anchorman” sequel “recaptures the silly, sloppy spirit of its predecessor, minus the crucial elements of surprise. It’s a frequently amusing, occasionally hilarious, rarely unpleasant grab bag of mild mockery ad inspired lunacy, decked out with cameo from beloved comic performers and random celebrities.”

3. Frozen – This is an all family movie. It’s funny, witty, engaging, and entertaining.

4. American Hustle – The Guardian’s film critic Peter Bradshaw says, “It’s all rangy and loose, with scenes that look as if they could be re-cut and re-edited every which way. It could easily be two or three times as long, and there is enormous pleasure in Russell’s sustained riffing. The pressure-cooker simmer of suppressed madness bubbles continuously and more consistently than in his previous film, Silver Linings Playbook, and more entertainingly than in an earlier movie such as I Heart Huckabees. And at the end, we feel dizzy and disorientated, like marks who don’t know we’ve been had. It is pure style from David O Russell.

5. Saving Mr. Banks –  On the website NY1.com, Owen Gleiberman in his review says, “the glory of “Saving Mr. Banks” is the ingenious way it uses the songs from “Mary Poppins.” Those songs help to win P.L. Travers over, and by the end, you’ll be shedding a tear at your own Proustian memories of Mary Poppins, a movie whose fairy-tale magic “Saving Mr. Banks” reveals to be richer and stranger than you thought.”

6. The Hunger Games: Catching Fire – Feedback from moviegoers includes the following, “Definitely just as good as the book,” “Love it,” “I actually think the movie was pretty underwhelming,” “The story line was very well written, the acting was amazing.”

7. A Madea Christmas – Some critics view this as one of Perry’s worst movie installments. Slapdash, lightweight, humorless, and meaningless according to some netizens. However, the loyal Perry’s followers will find it inspirational and enjoyable.

8. Walking With Dinosaurs – This movie is viewed as bland; although portraying impressive images, the content is considered as mediocre, and the plot seen as haphazard.

9. Thor: The Dark World – The Atlantic’s Christopher Orr says, “though hardly a must-see, Thor: The Dark World is, if anything, better than the original: a looser, loopier hybrid of science fiction and fantasy powered by a pair of magnetic performances and leavened with a number of truly witty moments. Yes, the movie spends too much time in Asgard, which is (even by comic-book standards) an exceedingly silly place. But for fans of the superhero genre, the film is nonetheless a likable diversion,”

10. Dhoom 3 – According to wikipedia.org, “Dhoom 3 received positive to mixed reviews from critics upon release. The film has been praised for its direction, cinematography, action sequences, exotic locations, Katrina’s dance performances and Khan’s intense portrayal of a villain. While the script was noted by some critics for its surprising twist, it was also criticized by others for being unimaginative and dull.”