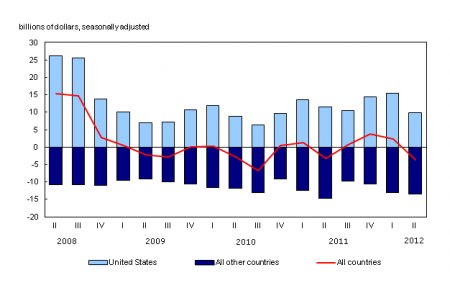 The Balance of Payments is defined by Investopedia.com as “a record of all transactions made between one particular country and all other countries during a specified period of time. Balance of payments compares the dollar difference of the exports and imports, including all financial exports and imports. A negative balance of payments means more money is flowing out of the country than coming in and vice versa.”

This flow of money can be divided into the following three categories:
1) the current account
2) the capital
3) the financial account

The current account records the inflow and outflow of goods and services into a country. It involves credits and debits on trade that include raw materials and manufactured goods imported as well as services such as money spent by tourists, foreign governments, and royalties from patents and copyrights.

Foreign direct investment – refers to long term capital investment such as the purchase of land,  buildings, manufacturing plants, and machinery

The financial account records international monetary flows related to investment bonds and stocks. In addition, it includes assets owned by the government such as gold, foreign exchange, special drawing rights held with the International Monetary Fund, private assets held abroad, and direct foreign investment. Added to this, are assets owned by foreigners.

The balance between the current account and the capital and financial accounts is important as a continual deficit lends to lack of confidence in a country’s economy. On the other hand, a continual surplus indicates good exports practice but at the same time implies trade restrictions on imports.