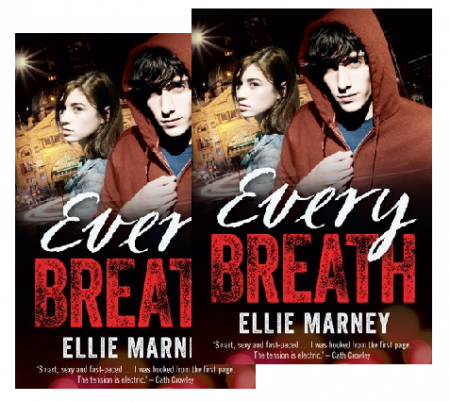 Ann Bever in her review of the book titled “Every Breath” by Australian young adult writer Ellie Marney noted that in this first U.S. release, readers will get to meet Rachel Watts who is an outback girl stuck in the big city of Melbourne whose best friend is her next door neighbor, the bad boy seventeen-year-old genius, James Mycroft.

Bever further provides the following insights into the novel:

James Mycroft is a brilliant young man with a troubled past. His obsession with forensics and his friendship with Rachel Watts draw them into a murder investigation when Mycroft finds his friend Homeless Dave dead outside the Melbourne zoo. As they work together to unravel the mystery, they learn each other’s histories and demons. These two opposites are pulled into a relationship deeper than friendship.

What’s great about the book?

This is one of those novels where the city, setting, and culture are as much a character in the story as the people. The details are vivid, full of color and personality, real and gritty, diverse and complex. You feel Rachel Watts’ love for the wide-open country and the red dirt of the Australian outback. Melbourne, Australia is vibrantly and realistically brought to life on the page with plenty of Aussie culture and slang that will keep you running to a dictionary.

The electric relationship between Mycroft and Watts.

The reader has a close and personal bond with the characters, understanding their emotions and impulses, because the author has taken the time to develop the characters. Watts and Mycroft are friends pulled and drawn together by circumstance and fascination. This is not a falling in love hard type of novel but rather the story of a friendship that builds into an awareness of something more under the surface. You feel it slowly unwind through the course of the book.

It’s realistic, gritty, and centered in the city and setting. It revolves around the people and their actions, observing and telling their story, not painting a two-dimensional picture with hyperbolic action and over-the-top dialogue. The mystery is not just a plot device. It’s realistic and believable with each clue building momentum that pulls you towards the conclusion. The author takes the time to introduce the reader to Rachel Watts, her family, and how she ended up in Melbourne. The author does an excellent job of unfolding the story and the layers in Watts and Mycroft’s friendship that build and strengthen their tie to each other.