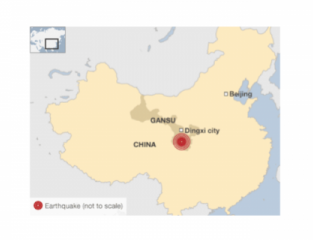 Chinese state media say emergency personnel have rushed to reach a northwestern region hit by a strong earthquake that killed at least 89 people, but landslides are hampering the disaster response.

The US Geological Survey said the shallow, magnitude 5.9 quake struck early Monday, near the city of Dingxi in mountainous Gansu province. It said a second tremor measuring 5.6 shook the area about 90 minutes later, while hundreds of aftershocks followed.

The area has been hit by 371 after shocks, according to the Earthquake Administration of Gansu province. Tremors were felt in the provincial capital, Lanzhou, and as far away as Xian, 400km (250 miles) to the East. In 2008, an earthquake in Sichuan province left up to 90,000 people dead and millions homeless.

According to a BBC report, at least 5,600 houses in the province’s Zhangxian county are seriously damaged and 380 have collapsed, while some areas suffered from power cuts or mobile communications being disrupted, the earthquake administration added.