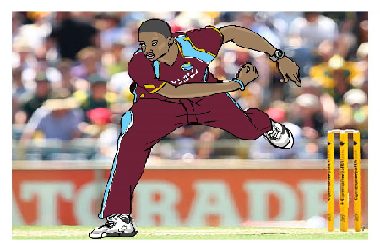 ​”Some folks will say, ‘Oh, winning ain’t all!’ But I know it is all. At the end of the day, no one looks at the loser. So that is why we play to win.” — Sir Vivian Richards

Broad to Blackwood, OUT!

The Windies squad returned home without the Wisden Trophy and will remain with tag — Windies has not won a Test series in England since 1988.

Although they are ranked eighth in the ICC’s Test table, one was hoping that they would have helped themselves to at least a series draw.

Yes, the team could have performed much better, but for the team’s handlers’ lack of imagination and creative thinking.

However, they have taken their shellacking and must now go back to the drawing board and reinvent themselves.

That said, a report card is provided below for reflection:

John Campbell was flashy while facing the new ball. He didn’t show enough patience in his batting. The 3rd match of 2nd innings was only one instance where he showed some character but failed to capitalize on the good start.

Experienced opener Kraigg Braithwaite didn’t seem to have a good time batting in English conditions. He failed to give the Windies a good start and survive the new ball. Most of his dismissals were bowled and lbws.

Shai Hope is the hope of the Windies team in ODI cricket but hasn’t been in-form for the past two years in test Cricket. Every team has a technically strong batsman batting at number 3. Shai Hope no doubt is the most technically sound batsman of West Indies but hasn’t delivered for a while now.

Roston Chase is the only spinner who has been effective in this series. He took a fifer in the 2nd test match. He did not contribute much with the bat, but one saw only regular 30s and just one half-century from him.

Jermaine Blackwood is the only Windies batsman who showed temperament in the entire batting line-up. He was the architect of Windies victory in the first Test by scoring the match-winning 95 runs while chasing a target of 200.

He also batted in situations where chips were down and showed a lot of confidence in his footwork. He got a couple of good fifties but couldn’t convert those starts to big tons. Most of the time, he got out by soft dismissals.

New to International Cricket Shamarh Brooks had batted well in middle-order. He played a few good knocks along with Blackwood, but just like other Windies batsmen, failed to convert good starts into a big score.

Wicketkeeper-batsman Shane Dowrich was sloppy in his catching. Although he didn’t drop any, he had a couple of blows to his fingers and also his Jaws. His batting was good in the first match, but he drastically failed in the following matches.

His twin ducks in the second match exposed his weakness against the short-length deliveries. He had a tough time facing quick bouncers coming from the England bowlers.

As the number one all-rounder pre-series, Jason Holder was expected to lead from the front with both bat and ball. He took a 6-wickets haul in the first innings of the first match but didn’t deliver after that.

Considering that he scored a double ton in the previous tour, a lot was expected from him with the bat, but he failed to deliver. He looked clueless in the 2nd and 3rd matches.

The bowling decisions and team selections made by skipper Holder wasn’t up to par. Some other day these decisions could have turned out good if the result would have gone the other way.

Man of the match in the first Test for his consistent bowling, Gabriel looked lost and tired after the first game.

Leaving the overs incomplete and going off the field for a while, clearly indicated that he wasn’t in the same good rhythm as in the first Test. He lacked discipline in his bowling figures as he tried to push his lower body too much onto the popping crease, which eventually increased the frequency of no-ball.

Roach was not amongst the wickets in the first Test. He ended the drought by taking wickets from the second match. He also completed his 200 wickets landmark, becoming the 9th Windies bowler. He bowled with consistent line and length with a good economy rate. He did his job by draining runs from one end. If he had enough support from the other bowlers, the team could have done better.

An exciting young talent Alzarri Joseph didn’t perform too well in this series. Fitness has been a concern for him.

However, it will be a learning experience for him touring away from home.

Cornwall was picked in the 3rd match as an extra spinner. He didn’t pick any wickets despite bowling more overs than Roston Chase. He took a fantastic catch to dismiss Rory Burns off Roston Chase.

On the other hand, the England players hopefully taught the Caribbean team a lesson or two by winning the series 2-1.

England might have had enough of Denly in the longer format of the game. He was dropped after scoring 18 and 29 to make space for England’s regular Captain Joe Root in the squad.

Although he generated some fiery pace on a slow pitch, took only 2 wickets in the first match England played.

He was the man of the moment for England as they won all the eight matches in which he appeared. He took three wickets at an average of 33 before he was left out for the third match.

Apart from the 76 runs in the second innings of the first test match, Zak struggled to leave an impact. He was left out in the final Test to bring an extra bowler in the squad. In the two Tests he appeared, he scored 97 runs at an average of 24.25.

Archer bowled better than his record suggests in the series. Took three wickets in the second innings of the first match, dropped in the second Test, managed to get only one wicket in the final Test. The 25-year-old will remember this series mostly because of his disciplinary actions than his bowling performance.

The bowling allrounder showed promising signs with both bat and ball during the series. He was the part of all the three Test matches England played. Bess remained not out thrice out of the four times he came out to bat, scored some useful runs at a good pace. Took five wickets at an average of 41 and scored 83 runs in the series.

The expectation level from a player like Anderson is always sky high. In Broad’s absence in the first Test, Anderson looked pretty good. He was rested for the second test match while Broad and Woaks did all the work for him in the final test match. He took five wickets along with 25 runs with the bat in the two matches he played

Buttler is a character who always puts the team ahead of himself. The nature of his batting position reflected the role he played in the first two matches.

In the third Test, he scored useful 67, batting at number 6, a more comfortable position. Overall, in the three Tests, he took 12 catches and scored 151 runs.

Woakes overshadowed Anderson and Archer with the ball. In the two test matches, he claimed 11 wickets, including a match-winning five-for. His struggle with the bat continued as he failed to leave a mark in that department.

Played in the 3 Test Matches Scored 234 runs at an average of almost 47. In the first two test matches, he failed to convert the starts into big scores but played his part in seeing off the new ball and fresh bowlers. He scored two half-centuries in the third test match with the scores of 57 and 90, respectively.

Sibley showed consistency when he got off the mark. He played all 3 Tests, scored 226 runs at an average 45.20, including two half-centuries and a highest score of 120. The two ducks dented his overall individual score.

Missed the first Test match due to paternity leave, took charge when the team was one match down, eventually lifted the trophy with ease. This series reflected Root’s maturity as a captain. He made some bold decisions, read the situation well, and used bowlers to perfection. He scored 130 runs 2 test matches at an average of 43.33 with a highest score of 68*.

Ben Stokes earned the title of the current number one world allrounder. He improved on his performances throughout the series. Although England lost in his first stint as Captain, his performance as a player was on song. He was the leading run-scorer of the series, with 363 runs at an average of 90.75. He also bagged nine crucial wickets at key moments to dismantle the Windies.

Controversially left out for the first Test match, he proved to critics that he has a lot in his tank. He earned Man of the Series award for his brilliant performance as he was the leading wicket-taker 16 wickets at an average of 10.93, including a five-for. He was also handy with the bat scoring the fastest half-century in England’s Test History. He has now become the seventh Bowler to take 500 test wickets.