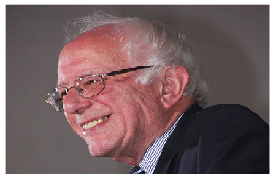 Bernie Sanders, the avowed Democratic Socialist and a candidate for nomination to lead the Democratic Party in the upcoming Presidential election in November, has run one of the most brilliant political campaigns in the history of American elections.

Sanders announced his participation in the race in April 2015, with the odds stacked against him, both in terms of finance and party leadership support.

However, that did not deter or intimidate Sanders who could easily be described as a man without guile and one whose conviction is unshakeable.

Sanders, a no nonsense politician, and one who is no stranger to the rough and tumble of political fights on the stumps has long earned his political stripes from as early as in the 1960s fighting for the cause of the masses.

He was elected mayor of Burlington—Vermont’s most populous city—in 1981, where he was reelected three times. In 1990, he was elected to represent Vermont’s at-large congressional district in the U.S. House of Representatives. In 1991, Sanders co-founded the Congressional Progressive Caucus. He served as a congressman for 16 years before being elected to the U.S. Senate in 2006. In 2012, he was reelected with 71% of the popular vote.

His Presidential run got off the ground on May 26, 2015, in Burlington under the theme — “A political revolution is coming.”

Sanders said then, “I don’t believe that the men and women who defended American democracy fought to create a situation where billionaires own the political process.”

He also stated then that he would not pursue funding of his campaign through a “Super PAC”, but would focus on small individual donations.

Between that first announcement and now, Sanders’ presidential campaign raised over $200 million with more than 60% coming from small individual donors.

Sanders used social media to help establish his campaign. His content posts to online platforms such as Twitter and Facebook as well as appearance on Reddit gained his campaign momentum as well as help to consolidate his position against leading party rival Hillary Clinton.

Additionally, given his message of identifying with the middle class, he garnered large grassroots organizational following online that quickly help to propel his campaign even further.

In a meetup organized online, he brought over 100,000 supporters to more than 3,500 simultaneous events nationwide.

Moreover, Sanders’ campaign events drew some of the largest crowd around the country in this election cycle. He also outshone Clinton in a number of their public debates and brought more energy and excitement to the Democratic Party campaign.

Also known as a critic of U.S. foreign policy, he was quick to oppose the Iraq War. He has been outspoken on civil liberties and civil rights, particularly criticizing racial discrimination in the criminal justice system as well as advocating for privacy rights against mass surveillance policies such as the USA PATRIOT Act and the NSA surveillance programs.

The fact is Sanders has fought doggedly throughout the campaign and has already received praise from all and sundries.

“Let there be no mistake, Sen. Sanders, his campaign, and the vigorous debate that we’ve had about how to raise incomes, reduce inequality, and increase upward mobility, have been very good for the Democratic Party and for America,” Clinton said.

In the meantime, Sanders has said, “Donald Trump would clearly, to my mind and I think the majority of Americans, be a disaster as president of the United States. It is unbelievable to me, and I say this in all sincerity, that the Republican Party would have a candidate for president who in the year 2016 makes bigotry and discrimination the cornerstone of his campaign.”

Moreover, Sanders noted, “Needless to say, I am going to do everything in my power, and I will work as hard as I can, to make sure that Donald Trump does not become president of the United States.”

So, as the curtain closes on Sanders’ campaign, the Democrats will no doubt be moving towards uniting around their standard bearer Hillary Clinton who will now fight to keep Republican Party nominee Donald Trump from setting foot in the White House as President.

That said, Bernie should continue to burn fire for his cause to ensure that there is “livity” in the truth of these words, “We hold these truths to be self-evident: that all men are created equal; that they are endowed by their Creator with certain unalienable rights; that among these are life, liberty, and the pursuit of happiness.” — Thomas Jefferson