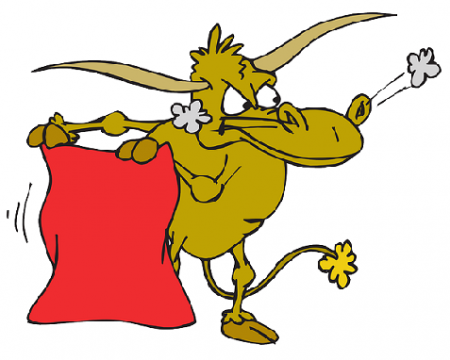 “I think the president choosing to do a lot of things unilaterally on immigration would be a big mistake,” he told reporters. “It’s an issue a lot of my members want to address legislatively. And it’s like waving a red flag in front of a bull to say, ‘If you guys don’t do what I want, I’m going to do it on my own,’” said Mitch McConnell, the current Minority Leader of the U.S. Senate who is set to become Majority Leader in early January.

The fact is any color flag the President waves, the Republicans can’t help but come charging. It’s part of their political game and they have the Senate and House seats to show for it. Now, it will be interesting to see what President Obama – the matador – will do over the next two years as he fights with a Republican Congress.

That said, in the sport of bullfighting which started in the 1700s, people have perpetuated the myth that the color red will make a bull goes wild.

However, according to livescience.com, bulls do not charge at the sight of red, neither do other cattle. The fact is they are all color-blind to red.

The bull charges at the matador because of the movement of the cape he continues to whip around which acts as an irritant to the bull.

In fact, the website cited a 2007, Discovery Channel’s MythBusters experiment which tested a live bull on color versus movement in three separate experiments.

First, they put three stationary flags, which were red, blue and white, in a bull’s enclosure. The bull charged all three flags regardless of color.

Second, they placed make shift matadors into an arena, each holding a flag of a different color that is red, blue, and white. They then wait to see what would be the response of an angry bull towards each different color flag. They discovered that the bull’s attack was basically the same towards each.

Finally, they put a live person dressed in red in the ring with the bull. That person stood still while two cowboys — not in red — moved around the ring. The bull went after the moving cowboys and left the motionless red-clad person alone.

Conclusion, the color red isn’t what causes bulls to attack. In fact, bulls don’t seem to have any color preference at all. They’ll charge whichever object is moving the most.