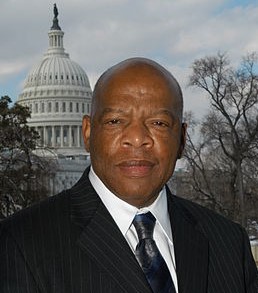 President-elect Donald Trump continues to draw from his playbook and in a no holds barred launched an attack on U.S. House Representative and civil rights legend John Lewis.

Trump did not mince words as he fired off his 140 characters from his twitter feed into Lewis.

Trump tweeted that Lewis, “should spend more time on fixing and helping his district, which is in horrible shape and falling apart (not to mention crime infested) rather than falsely complaining about the election results.”

The 16-term congressman reportedly said that he would not attend Trump’s swearing-in ceremony at the Capitol this coming Friday and that it would be the first time he had skipped an inauguration since joining Congress three decades ago.

“You know, I believe in forgiveness. I believe in trying to work with people. It will be hard. It’s going to be very difficult. I don’t see this president-elect as a legitimate president,” Lewis reportedly said in an interview with NBC’s “Meet the Press” that is set to air Sunday.

“I think the Russians participated in helping this man get elected. And they helped destroy the candidacy of Hillary Clinton,” Lewis said.

John Robert Lewis is the U.S. Representative for Georgia’s 5th congressional district, serving since 1987, and is the dean of the Georgia congressional delegation. His district includes the northern three-quarters of Atlanta.