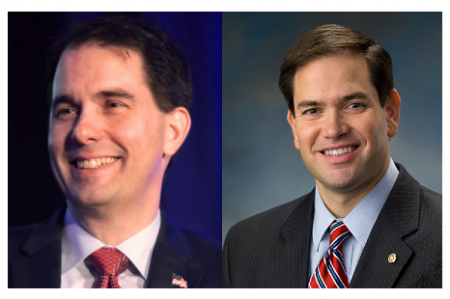 In an attempt to gain some press headlines, both Wisconsin Governor Scott Walker and Florida Senator Marco Rubio have tried to outdo each other in bashing China ala the leading Republican presidential candidate Donald Trump.

First, Walker is appealing to President Barack Obama to cancel Chinese President Xi Jinping’s upcoming state visit to the U.S. which is scheduled to take place in September.

On the other hand, Rubio is calling for the Chinese President’s trip to be downgraded to a regular working visit rather than an official diplomatic trip.

The two candidates have suddenly discovered that China should be punished for their poor human rights record and their alleged cyber-attack on the U.S.

Moreover, both have taken Obama to task for not confronting China on its socio-economic policies.

“Americans are struggling to cope with the fall in today’s markets driven in part by China’s slowing economy and the fact that they actively manipulate their economy,” Walker reportedly said.

“Rather than honoring Chinese President Xi Jinping with an official state visit next month, President Obama should focus on holding China accountable over its increasing attempts to undermine U.S. interests,” he also said.

That’s a bold and barefaced statement from a man who has visited China twice with arms open seeking help to boost his state’s economy.

On the other hand, 44-year-old Marco Rubio, in order to demonstrate his authority on foreign policy, has charged that President Obama is continuing “to appease China’s leaders despite their mounting aggression.”

“Look around the world today. Every source of instability on this planet is created by a tyranny. It’s the North Koreans, the Chinese, the Russians, radical Islamists and Iran,” the first term senator posited.

“We can no longer succumb to the illusion that more rounds of cordial dialogue with its rulers will effect a change of heart,” Rubio said.

He also expressed fear about China’s reach and power.

“At the end of the day, China is governed by an autocratic, communist regime—very closed off—and they’re strategic competitors at a minimum without a doubt. And in the case of their military posture in the Asia-Pacific region, they are increasingly a strategic competitor and potentially [an] adversary,” he said.

For men who trump Ronald Reagan’s conservative legacy they would do well to view the geopolitics of the day through the lens of the former president, “And we have made it plain that in continuing and trying to build this friendship with the People’s Republic of China on the mainland, we in no way retreat from our alliance with the Chinese on Taiwan.”

The brow beating of China doesn’t build relationship and friendship, but creates animosity and distrust.

The fact is the U.S. cannot hammer China back into the 19th century, so it’s best to view them as equal partners at the table and engage them in transformational change rather than dictates from a high and mighty position.