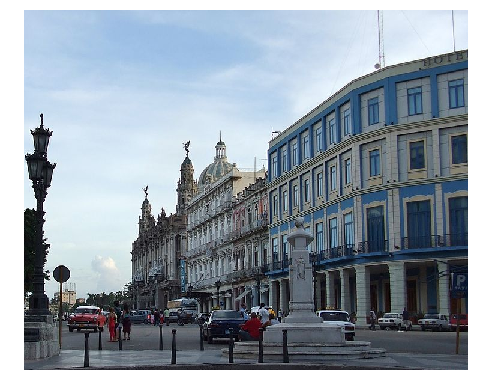 Although Cuba is a known communist ruled country not many people would have experienced its white-sand beaches, seen its rolling mountains, visited its well-preserved Spanish colonial architecture, drank its rum, tasted its wide range of culinary dishes or even smelled its renowned tobacco.

However, this may not hold true much longer as today more and more countries are easing restrictions on travel to the large Caribbean country.

So, if you decide to travel south to while away your leisure hours in Cuba, here are some must see places:

This is the capital of Cuba and is the center of commerce, entertainment, and industry. It has a population of over 2 million people and is the largest city by area in the Caribbean region.

The city is described as trapped in time. It emerges from compact 19th-century barrios into more spacious 20th-century municipios and post-Revolutionary working class suburbs. Functional apartment blocks give way to once-noble, upper-class districts full of Beaux Arts, Art Deco, and Modernist mansions, while concrete office blocks, government buildings and hotels from the 1950s lend the city a retro feel.

One of the draws of this beach is its proximity to the cute, cobbled colonial town of Trinidad on Cuba’s southern coast, but that’s by no means the only attraction. Playa Ancón comprises almost three miles of soft white sand, and there are great opportunities for snorkelling and scuba diving in the warm Caribbean waters. The shores here are quieter than those of package holiday hubs Varadero and Guardalavaca, ensuring it remains one of our top Cuba picks.

The Vinales Valley is the tourist hot spot in the town of Vinales. Tourists who go here are mainly adventure seekers. The valley is the perfect spot to go hiking, rock climbing, and bicycling.

Since the year 1999, the Vinales Valley has been listed in UNESCO’s World Heritage Sites. Because of its rich culture, natural beauty, and grand history, it has been designated as cultural landscape.

Santiago de Cuba is Cuba’s second largest city. This municipal is the second most important city next to Havana because of its sea ports and its connection to the Caribbean Sea.

There are a lot of historical landmarks in this city; consequently, tourists flock to Santiago de Cuba.

One of the most popular sites in Santiago de Cuba is the Castillo de Morro. This fortress is better known as Castillo de San Pedro de la Roca.

According to UNESCO, Castillo San Pedro de la Roca is the most complete, best-preserved example of Spanish-American military architecture, based on Italian and Renaissance design principles. In addition to Castillo de Morro, the Baconao Park was also listed in the UNESCO world heritage biosphere reserve back in 1987.

This is an idyllic playground for ecotourists and scuba divers. It is sparsely populated and zealously protected, most of the region lies within the Ciénaga de Zapata Biosphere Reserve (also known as the Gran Parque Natural Montemar), habitat of rare birds, crocodiles and a wide variety of ecosystems. Highlights within the biosphere are the Parque Nacional Ciénaga de Zapata and Laguna de las Salinas, known for its concentration of migratory birds.

Many of the people here work as carboneros, eking out a living making charcoal. The area is known for Bahia de Cochinos, site of the Bay of Pigs Invasion. Known locally as “La Victoria”, the event is commemorated in two museums.