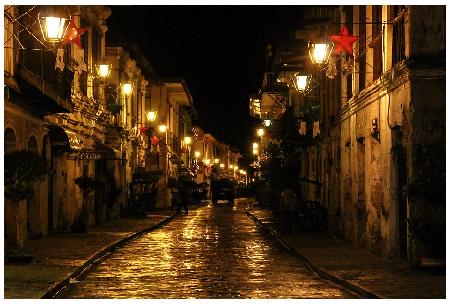 According to whc.unesco.org, Vigan is the most intact planned Spanish colonial town to be found anywhere in Asia, established in the 16th century.

The city’s architecture reflects the combination of cultural elements from China, Europe, Mexico and elsewhere in the Philippines to create a unique culture and townscape without parallels anywhere in East and Southeast Asia. Vigan was an important trading post before the colonial era; it is sited at the river delta of Abra River, along the northwestern coastline of the main island of Luzon, in the province of Ilocos Sur, Philippine Archipelago.

The total area of the inscribed property is 17.25 hectares.

The traditional Hispanic checkerboard street plan opens up into two adjacent plazas. The Plaza Salcedo is the longer arm of an L-shaped open space, with the Plaza Burgos as the shorter.

The two plazas are dominated by the St. Paul’s Cathedral, the Archbishop’s Palace, the City Hall, and the Provincial Capitol Building.

The urban plan of the town closely conforms to the Renaissance grid plan specified in the Ley de la Indias for all new towns in the Spanish Empire.

There is, however, a noticeable difference between Vigan and contemporary Spanish colonial towns in Latin America in the Historic Core (known as the Mestizo district), where the Latin tradition is tempered by strong Chinese, Ilocano, and Filipino influences. As its name implies, this district was settled by affluent families of mixed Chinese-Ilocano origin.

The area contains the historic footprint of the entire town and consists of a total of 233 historic buildings tightly strung along a grid of 25 streets.

The two storey structures are built of brick and wood, with a steeply pitched roof reminiscent of traditional Chinese architecture.

The exterior walls of the upper storey are enclosed by window panels of kapis shells framed in wood which can be slid back for better ventilation. Most of the existing buildings were probably built in the mid-18th to late 19th centuries.

Due to the economic decline of Vigan as an economic center after the World War II, only a few of the historic buildings had internal reorganization for alternative use.

The Chinese merchants and traders conducted their business from shops, offices, and storerooms on the ground floors of their houses, with the living quarters above. In addition to the domestic and commercial architecture, Vigan possesses a number of significant public buildings, which also show multi-cultural influences.

Vigan is unique for having preserved much of its Hispanic colonial character, particularly its grid street pattern and historic urban lay out. Its significance also lies on how the different architectural influences are blended to create a homogenous townscape.