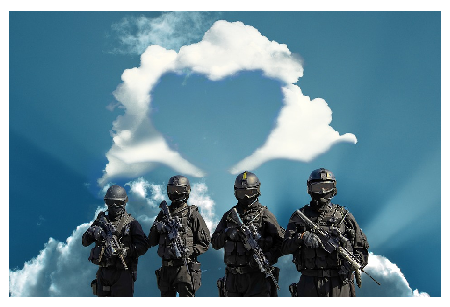 But Don’t Be Stupid

The call by Pope Francis in his Easter message to use the “weapons of love” to combat the evil of “blind and brutal violence,” following the attacks in Brussels is a noble one.

The fact is love is not only an indelible mark of the Christian faith as symbolizes in the birth, death, and resurrection of Jesus Christ, but it’s also an edict that is central to the Christian doctrine.

After all, it was Jesus who said on these two commandments hang all the law and the prophets: This is the first and great commandment.

And the second is like unto it, Thou shalt love thy neighbor as thyself.

Therefore, the appeal of the Pope to love and overcome evil with good is well founded.

At the same time, one cannot become love struck to the extent that one does nothing to avert the action of Islamic terrorists.

The fact is the Pope is protected by the Swiss Guards who do not bear their arms lightly and will not hesitate to act to protect the Pope if the situation demands it.

The truth is Islamic terrorists have demonstrated time and again that they will show no mercy on people whom they consider to be infidels and will wantonly kill at the drop of a hat.

Moreover, Islamic terrorists through their act of violence have already driven out the majority of the Christian population from the Middle East.

According to a dailymail.co.uk report, the international Catholic Charity Aid to the Church has warned that Christians face being wiped out from the Middle East within ten years as increasing numbers are killed by Muslim extremists or forced to flee persecution.

The report also noted that the alarming rate of Christian decline means the religion could vanish in some areas in just five years unless the world steps in to help.

The Islamist group ISIS has also warned that they intend to infiltrate the refugee population fleeing to Europe and other parts of the world.

This of course is not only of concern, but certainly must be disconcerting to the people of Europe.

The fact is the Islamist terrorists have one mission and that is to kill all non-believers and apostates.

So, how does one overcome the violence, injustice and threats to peace, and moreover, conquer the evil one sees openly manifested around the world?

Certainly, love for fellow human being ought to be an integral part of the equation, but it can’t be at the expense of being a Pollyanna where caution is not exercised and due diligence not undertaken in facilitating migrants and refugees not only in Europe, but also other parts of the world.