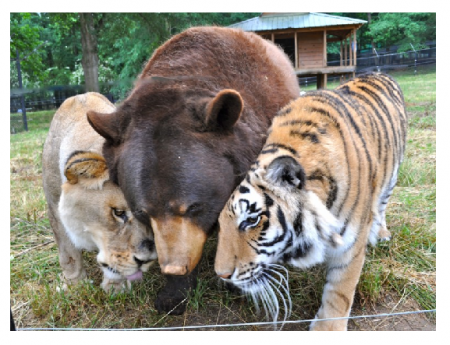 This bear, lion and tiger trio is lovingly called BLT by their caretakers — and they’re the best of friends! They were rescued together as cubs almost 13 years ago and are still inseparable.

No need to be afraid of these wild animals, Dorothy: This lion, tiger and bear are best pals! An unusual trio, sure, but these three literally cannot live without each other.

They were rescued from the basement of a home in Atlanta, Georgia, during a 2001 drug raid and turned into Noah’s Ark, a nonprofit animal sanctuary just south of the city, according to My Modern Met. As the staff at Noah’s Ark nursed the injured and malnourished cubs back to health, they decided to separate them.

But upon separation, all three animals became lethargic, sad and couldn’t eat, Allen says. So they put them back into the same enclosure and they’ve been inseparable ever since.

Read more:  Scroll through the gallery to see how adorable they really are!