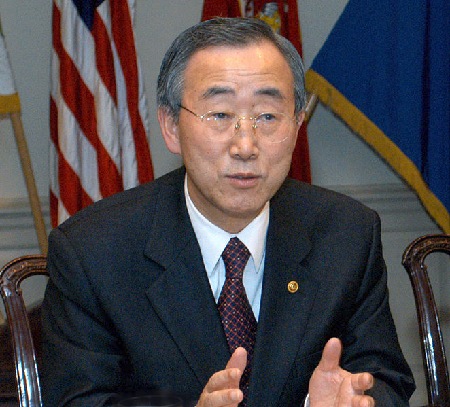 The United Nations Secretary-General Ban Ki-moon in a bid to make amends and appease the Haitian people has for the first time offered an apology for the cholera epidemic which ravished the island state, killing at least 10,000 people after the 2010 earthquake.

“On behalf of the United Nations, I want to say very clearly: We apologize to the Haitian people,” Ban told the UN General Assembly. “We simply did not do enough with regard to the cholera outbreak and its spread in Haiti.

The UN for a long time played mute to the fact that it was its Nepalese peacekeepers that brought cholera to the island nine months after the devastating earthquake.

“This has cast a shadow upon the relationship between the United Nations and the people of Haiti. It is a blemish on the reputation of UN peacekeeping and the Organization worldwide,” Ban also said.

Additionally, Ban, appealed for member states to pledge financial support in the form of what he called “voluntary contributions.”

In the meantime, Sen. Edward J. Markey, the top Democrat on the US Senate Subcommittee on Africa and Global Health Policy, expressed hope that member states would support the UN General Secretary’s call.

“This apology from the United Nations has been years overdue and is an important first step for justice for the people of Haiti,” Markey said in a statement.

“The people of Haiti have long deserved more than just acknowledgment for the pain and sacrifice they have suffered in great part due to UN negligence. The UN must now put its money where its mouth is and provide compensation to the Haitian people suffering from the devastation caused by the cholera epidemic.”

Haiti has never had a cholera outbreak in its recorded history, until the arrival of the UN Nepalese peacekeepers who disposed of their waste at the mouth of the river in the country.