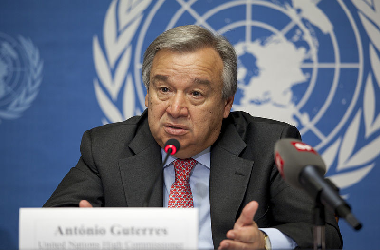 UN Secretary-General Antonio Guterres said, “It is clear that there are two different positions on what is happening in Ukraine.”

He said the Russian Federation holds the view that “what is taking place is a special military operation with the objectives that were announced.”

Whereas “according to the UN, in line with the resolutions passed by the General Assembly, Russia’s invasion of Ukraine is a violation of its territorial integrity and against the Charter of the United Nations.”

He noted that “The United Nations has repeatedly called for ceasefires to protect civilians and to facilitate a political dialogue to reach a solution, but “So far, that has not been possible.”

He lamented the fact that “a violent battle is underway with tremendous death and destruction.”

He said, “I am concerned about the repeated reports of violations of international humanitarian and human rights law and possible war crimes, and they require independent investigation for effective accountability.”

The UN Secretary-General appealed to the warring parties to allow for help to reach people who were in dire need.

“We urgently need humanitarian corridors that are truly safe and effective and that are respected by all to evacuate civilians and deliver much-needed assistance.”

He added, “To that end, I have proposed the establishment of a Humanitarian Contact Group, bringing together the Russian Federation, Ukraine and the United Nations, to look for opportunities for the opening of safe corridors, with local cessations of hostilities, and to guarantee that they are actually effective.”

He stated that there was a crisis within Mariupol where “thousands of civilians are in dire need of life-saving humanitarian assistance, and many, of evacuation.”

“The United Nations is ready to fully mobilize its human and logistical resources to help save lives in Mariupol,” he said, proposing coordinated work with the Red Cross to allow those citizens holed up with the city’s last defenders inside Mariupol’s Azovstal steel plant and in the city” to leave “in any direction they chose, and to deliver the humanitarian aid required.”

“This is not just about what is happening in Ukraine, as we are seeing shock waves around the world,” he noted.
Support The Readers Bureau Buy A T-Shirt Today ( 4 different colors)! click  https://www.bonfire.com/one-love-72/?fbclid=IwAR2bod-XSyrCPutOwG_SMnKiInk6Bqe2kCtjBsAFISqHluQcujrF2UUkFew