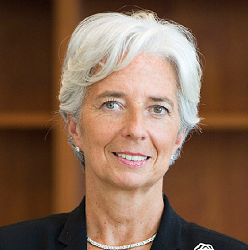 According to a press release, Christine Lagarde, Managing Director of International Monetary Fund (IMF), said the institution would lower its 2016 U.S. growth forecast again and called policies that restrict trade “economic malpractice” that would choke off growth.

Lagarde, in prepared remarks at Northwestern University, ahead of next week’s IMF and World Bank annual meetings, said the U.S. growth forecast would be reduced again because of economic setbacks in the first half.