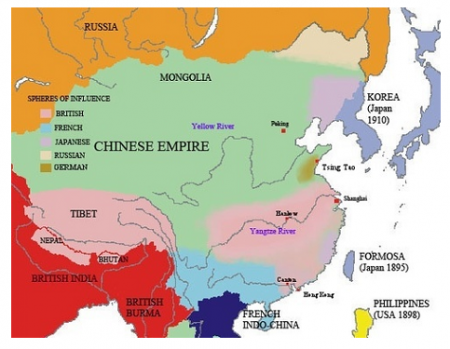 The question of why the United States did not conquer China is one posed and answered by Dan Holiday on the popular website quora.com.

It is not only an interesting question, but also one that is provocative in thought and scope.

Holiday posited four reasons for the U.S. not conquering China:

First, he claimed that the U.S. loathed European style imperialism as the country was itself a victim of colonialism. He argued that although the U.S. conquered lands within the Americas and territories outside its borders, ultimately, its aim was to act as a dismantler of European hegemony.

Second, he argued that by the time the U.S. reached its heights of military power and economic dominance, China though not colonized in the same way as places such as Indonesia, Indochina or India was already under the spheres of Europeans influence.

Consequently, the U.S. was prepared to watch from the sidelines of the Philippines other countries such as Japan, Russia, Germany, France, and Britain scramble over China.

Third, from the U.S. perspective, the European Empires were in their twilight and would fall soon. Therefore, the U.S. did not consider it within its interest to waste its capital building similar empires only to experience a collapse similar to other nations — the U.S. preferred mode of operation was economic trade to enrich itself, he declared.

Fourth, the U.S. was essentially self-sufficient and therefore could do without going about banging countries overseas to show world power and dominance.

He noted that by 1890 the size and shape of the U.S. had solidified. Moreover, the U.S. had become the largest single economy (excluding the entire British Empire). The U.S. was the world’s largest industrial producer, largest agricultural producer, and largest petrol producer.

Furthermore, he argued that the U.S. was largely under-populated with vast, amounts of land — more than sufficient for the nation’s needs in terms of resources, agricultural, and living space (76 million people in 1900 compared with 315 million today).

He concluded that over the next generation (1890-1910) the U.S. took its place at the table of great powers.

By 1910 the U.S. had passed the British Empire in economic size and its navy was the second largest in both tonnage and numbers (Britain, U.S., and Germany).

Given the country’s newly found wealth and global influence, the need for conquering China did not fit into the U.S. modus operandi.