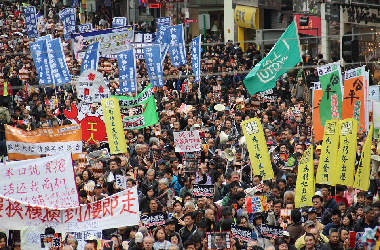 Stop meddling in our affairs; China warns the United States.

This comes against the backdrop of the U.S. Congress passing a bill that would punish banks doing business with Chinese officials who implement and impose Beijing’s draconian new national security law on Hong Kong.

The bill which passed the Senate by unanimous consent, a day after the House of Representatives also passed it without opposition, now awaits President Donald Trump’s signature.

Hong Kong returned to Chinese rule in 1997 under a “one country, two systems” formula that protected its freedoms, including an independent legal system and wide-ranging autonomy.

However, China reneges on its promise recently by introducing sweeping national security legislation for the territory that punishes crimes of secession, subversion, terrorism, and collusion with foreign forces with up to life in prison.

The bill also allows extradition to the mainland for trial as well as mainland security forces in Hong Kong.

In commenting on the current situation, House Speaker Nancy Pelosi said the new security law marked the death of the “one country, two systems” principle.

“The law is a brutal, sweeping crackdown against the people of Hong Kong, intended to destroy the freedoms they were promised,” said Pelosi.

He added, “Otherwise, China will resolutely and forcefully resist.”