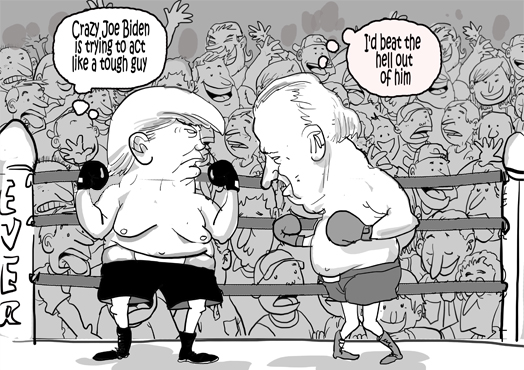 In a recent press interview, President Trump predicted that former Vice President Joe Biden would “limp” out of a crowded Democratic field to square off against him in 2020.

“I think right now it will be ‘Sleepy Joe,’ Trump told reporters, using his stinging moniker for his likely opponent.

“I think he’s off his game by a lot, but personally, I think it’s going to be ‘Sleepy Joe,'” said Trump.

Biden heads into the second Democratic debates this week with a nearly 20-point lead over his closest opponent for the nomination, according to a Quinnipiac University poll, despite a rough ride.

Trump, earlier this month, slammed Biden as “not mentally prepared” for the presidency.

North Korea strongman Kim Jong Un has also labeled Joe Biden a “fool of low IQ” and an “imbecile bereft of elementary quality as a human being” after the U.S. presidential hopeful called North Korean leader Kim Jong Un a tyrant during a recent speech.