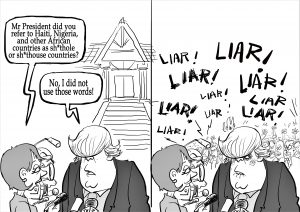 President Trump in his tweet storm has denied calling places such as Africa, El Salvador, and Haiti “shitholes” during a conversation about immigration with lawmakers — despite people in the room saying “Yes, he did!”

Trump’s attempt to walk back the comments came after intense criticism that his remarks were racist.

In a rambling Twitter rant on Friday, Trump confusingly claimed it was “not the language used” and said he “never said anything derogatory about Haitians other than Haiti is, obviously, a very poor and troubled country.”

While at the signing of a proclamation for the Martin Luther King Jr. federal holiday, Trump refused to answer shouted questions such as, “Mr. President, will you give an apology for the statement yesterday? Mr. President, did you refer to African nations as shitholes? Mr. President, are you a racist?”