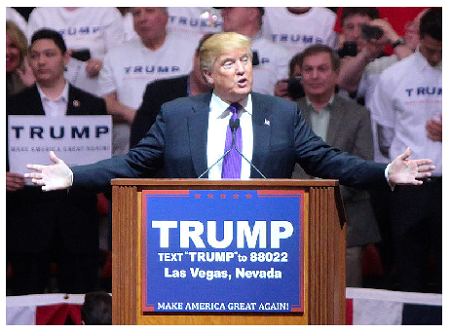 Republican front-runner Donald Trump is in no mood to allow his campaign to become bored and has made this known to his adoring fans and followers.

He recently ratcheted up his rhetoric by attacking his Democratic rival Hillary Clinton by referring to her as “crooked” Hillary.

Trump has maintained his line of attack on his opponents by pinning them with various tag lines. First, he would not let up on referring to his fellow Republican candidate Marco Rubio as “Little” Marco until he dropped out of the race.

He has also continued to label another of his Party’s Presidential running candidate Ted Cruz as “Liad” Ted.

Defying the advice of his handlers to go presidential, he told Fox News in a recent interview, “I can tell you that if I go too presidential, people are going to be very bored.”

He went on to say that Clinton “is a person who’s got many, many flaws” and that she’s “the worst possible representative a woman can have.”

“The only thing she’s got going is the women card,” Trump said in the excerpts released by the network on Friday.

Donna Hoffman, the head of the political science department at the University of Iowa, told Reuters that Trump’s fiery personality had put him in a bind at this stage of the race.

“The impetus to become more presidential is coming from some of the elite organs of the GOP, but he got to where he is today because of his persona,” she said.

“To continue this way will keep him alienated from the party, but to change means his supporters will question his authenticity,” she added.