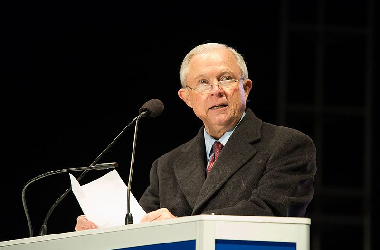 President Trump, in a broadside against his former attorney general, said Jeff Sessions wasn’t “mentally qualified” to be attorney general and was a “disaster” while in office.

The president said that Sessions “should have never” held the office.

“He was the biggest problem. I mean, look, Jeff Sessions put people in place that were a disaster.”

Sessions was one of the first Republican representatives to endorse Trump in his run for president.

However, both men have had a fallout since Sessions recused himself from the FBI’s investigation into Russian influence in the 2016 election.

He was later fired by Trump and replaced by the 85th and current United States attorney general William Barr.

On Saturday, the president formally endorsed college football coach Tommy Tuberville, who is challenging Sessions’ bid to return to the Senate, citing the recusal.

Sessions in an apparent response tweeted, “I did my duty & you’re damn fortunate I did.”

“It protected the rule of law & resulted in your exoneration,” he posted. “Your personal feelings don’t dictate who Alabama picks as their senator, the people of Alabama do.”

Sessions and Tuberville will compete in a July 14 runoff after a close Republican primary election in March.

The Republicans seek to unseat Sen. Doug Jones (D-Ala.), who took over Sessions’ seat in a 2017 special election.