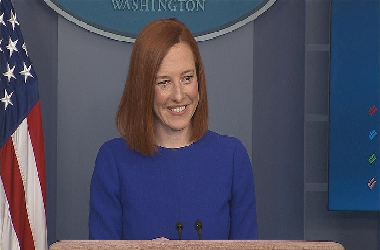 Former President Donald Trump at his rally in Michigan on Saturday referred to the White House press secretary, Jen Psaki, as “the woman with the really beautiful red hair.”

While complimenting her hair, Trump criticized Psaki for once joking about the Space Force, the U.S.military branch set up by Trump.

“The woman with the really beautiful red hair, she laughed,” he said. “And she was hit so hard by the military because they knew I was right. The military understood I was right.”

The former president also addressed a report by Axios that Psaki planned to leave the White House this spring and was in talks to join MSNBC.

“You know she’s going to MSDNC,” Trump said, using his derogatory nickname for the cable-news network.

President Trump is known for berating and ridiculing people who do not share his outlook and often comments on women’s appearances, by publicly assessing their attractiveness or lack thereof.