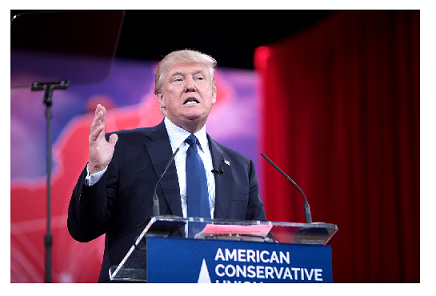 Presidential candidate Donald Trump has vowed in a recent announcement to support the Republican Party’s next presidential nominee – whoever it may be.

The Donald has boasted time and again about his negotiation skills so one wonders what was put on the table for him to have let go of his leverage so soon.

Trump reportedly said, “The best way forward … to win, is if I win the nomination and go direct against whoever (the Democrats) happen to put up. So for that reason, I have signed the pledge.”

Couldn’t this have happened without signing a pledge? Or is this a Christopher Columbus moment for the Donald?

“So, I will be totally pledging my allegiance to the Republican Party and the conservative principles for which it stands, and we will go out and we will fight hard and we will win,” he added.

The skeptics would say, “Give me a break Donald; you don’t roll over that easily.”

Trump’s decision came after negotiation with Republican National Committee leaders, who have been at their wits end to rein in the Donald and have him on board as part of a united front to win the White House.

The decision must have offered some sense of relief for the Republicans as any hold out from Trump could spell disaster for the GOP going forward into next year’s election.

That said the pledge is not legally binding which therefore means that the GOP must now handle Trump with kids glove as any change of mind by him could push the party out of contention for the Presidency.

However, Trump reportedly said, “I see no circumstances under which I would tear up that pledge.”

Politics indeed makes strange bed fellows, and this certainly is neither lost on Trump nor the Republican Party leadership.

“The RNC clearly felt it had to box Trump into a decision,” said Doug Watts, a spokesman for fellow candidate and retired surgeon Ben Carson. “We just sort of shrugged our shoulders, and that’s the end of that.”

The fact is the GOP leadership is deftly afraid of any third-party bid which could split the party and take them back to Ross Perot days when the billionaire ran as an independent thus taking votes from the Republicans and giving to White House to the Democrats.