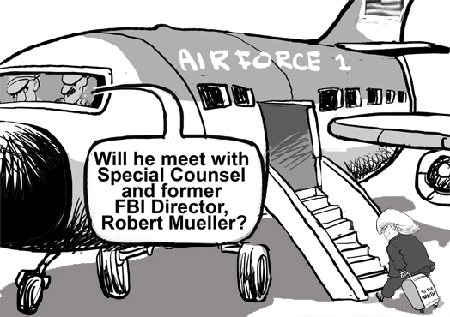 It’s on, no, it’s off, no, it’s on again that was the flip-flop call between Washington and Pyongyang before White House press secretary Sarah Sanders revealed that Trump and Kim will meet for the first time at the Capella Hotel on Singapore’s Sentosa Island.

The meeting is now set to take place at 9 a.m. local time on June 12 amidst great expectations from people around the world.

President Donald Trump has been upbeat about the meeting and recently dubbed it a “one-time shot” for Kim.

Trump also referred to his trip to Singapore to meet with Kim as “a mission of peace.”

He posited the view that there was a “good chance” the meeting would not work out and claimed he would know almost immediately after the start of talks how the situation would progress.

“I think within the first minute I’ll know,” Trump declared.

Although not willing to predict a definite outcome from the scheduled talks he has expressed optimism time and again. “So far so good,” was how President Trump rated the progress of the discussions leading up to the meeting.

“We’re going to have to see what happens,” he noted.

He also expressed the view that he hoped the meeting would at least begin a dialogue and a direct understanding between himself and the North Korea leader.

“At a minimum, I do believe, at least we’ll have met each other,” Trump said, adding later that “hopefully, we will have liked each other.”

Trump also noted that he would be able to assess whether the talks will be worth pursuing soon after the meeting is convened, and discussions begin.

“I think I’ll know pretty quickly whether or not, in my opinion, something positive will happen,” Trump said. “And if I think it won’t happen, I’m not going to waste my time. I don’t want to waste his time,” Trump stated.