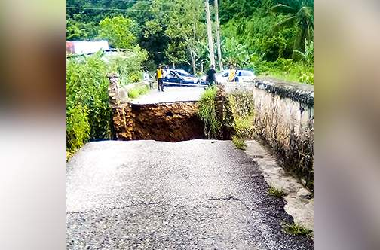 Nearly four months after the Troy bridge that borders Manchester and Trelawny collapsed, citizens who traversed both parishes on a daily basis for their social and economic well-being have been left stranded and yet to see any tangible move by the Government to address the situation.

Meanwhile, the citizens have embarked on a daredevil attempt to help themselves by creating a zipline made from materials that could give way at any time, resulting in people falling to their death more than 20 feet in the river below.

According to press reports, the National Works Agency spokesman Stephen Shaw could not give a timeline for a replacement bridge. Needless to say, the politicians who showed up could only pay lip service to a disaster waiting to happen.

The fact of the matter, the bridge in question was built in 1869, over 30 years after slavery was abolished. Over the years, it would seem there was little or no maintenance done to the bridge, thus the result we have seen today.

And, of course, this situation is not unique as one sees the dilapidated infrastructure on several fronts throughout the country.

In any self-respecting country, such a bridge would be preserved as a heritage site, but not so in Jamaica.

The truth is the residents in this small town are being shafted because they are playing by the rules; there is no protest or demonstration, consequently, there is no urgency for the Government to act.

For the most part, politicians represent people whose interests they do not have at heart. They become Members of Parliament for their own personal aggrandizement and ambition.

In many rural areas, if one compares the development before Jamaica gained its Independence in 1962 and after, one recognizes that, for the most part, there are no significant developments and in the areas that have made some ‘progress’, the communities appear so disorganized or “chacka chacka” they border on being shantytowns.

People have been allowed to set up buildings, however, and wherever they want, while the local governments have not been held accountable for their lack of oversight.

It is no wonder people are flooded out of their homes when there is a heavy downpour of rain and a hurricane, and if there were to be an earthquake, one would hate to think of the possible disaster and devastation.

However, in a country where development or progress is measured in terms of former Prime Minister P J Patterson’s words, “More people have running water, more people stop use kerosene, more people have electricity, and more man have gal dan anything else,” that may be the post-Independence standard.

That said, it is time for citizens to exhibit a new ‘woke’ attitude by holding politicians accountable for the development of their communities.

No community should remain at the same stage of development after a generation.

Meanwhile, the Jamaica Labor Party and People’s National Party have been enjoying bragging rights for things such as providing running water to a community – no self-respecting political party should be bragging about this in 2021.

The sooner the Jamaicans recognize the poverty they have in representative leadership, the more enlightened position they would be able to take going forward.