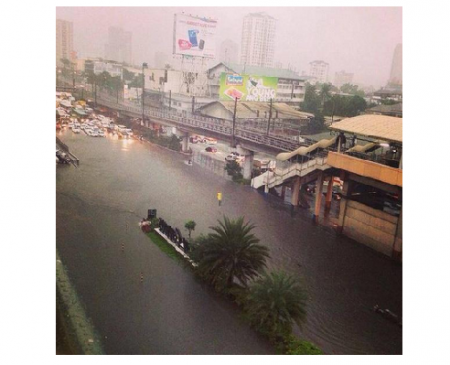 Rains and floods from tropical storm Fung-Wong have left at least five people dead in the Philippines, and hundreds of thousands of people displaced.

It has also forced the closure of government offices, schools and business offices.

More than 20,000 people were evacuated in the city of Marikina in eastern metropolitan Manila, where the river swelled and reached a critical level, the city government said.

With the capital Manila barely recovering from the onslaught of typhoon Kalaegi which took the lives of eight people and the displacement of thousands of people, the latest typhoon was an unwelcome phenomenon.

The Associated Press reported that the flooded streets caused gridlock as motorists were unaware of the extent of the flooding due to a lack of reports from local authorities.

Manila Mayor Joseph Estrada told reporters that floodwaters were receding as drainage pipes had been cleared of rubbish.

But he criticized anti-flood infrastructure, saying it had been “neglected for a long time”.

The Philippines grapples with typhoons and storms every year during the monsoon season.

Fung-Wong is expected to leave the Philippines by Sunday and will head towards Taiwan and Japan.