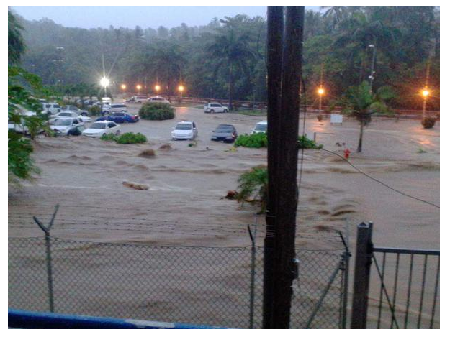 Hurricane Erika danced and pranced over several Caribbean islands late last week dumping torrential rain which resulted in floods and mudslides all over the region.

However, it saved the worst dance for the tiny island of Dominica killing at least twenty five people and causing substantial damages which will set the country back by about twenty years, according to the Prime Minister.

“We are in this together and help is coming your way.”

He also said that there were several people still missing.

The Prime Minister however pledged to do everything possible to ensure that contact is made with every community and a full account is given of every single missing person.

The Prime Minister, who was in Saint Lucia when the storm first hit, deflected criticism that the government didn’t issue proper warnings to its 70,000 citizens.

“There is no need to indulge in blaming others for what has happened in Dominica,” he told the nation.

He said forecasters had been focused on the larger islands in the Caribbean and Florida.

According to the weather channel, Dominica was deluged by over 12 inches of rain within few hours after the storm hit the country.

On its path the storm belted Dominican Republic and Haiti with torrential rain, washing away homes, covering low lying areas with water, and causing serious damages to road ways and other infrastructure.

By Saturday morning, Erika degenerated into a tropical wave thus posing no further serious threats to the islands.