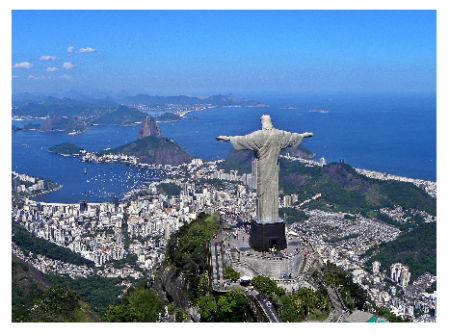 Yes, 2015 has just begun, and no doubt if you are an avid traveler or a wannabe you may already have been thinking about your travel plans, or itinerary for the New Year.

Now, how about a trip to Brazil? It is the fifth largest country in the world and ranks among the world’s largest in terms of population. Brazil until 2010 was one of the world’s fastest growing major economies, ranking seventh in terms GDP growth rate.

Despite, the immense expanses of the interior of the country, about two-thirds of the population lives in and around the coast with over half living in the cities.

The country’s climate is mostly tropical but also comprises a range of weather patterns and conditions.

Although not as mountainous as most of its neighboring countries, the scenic view of the country is stunningly beautiful as well as breathtaking. To ascend the Corcovado Mountain in Rio de Janeiro where the image of Christ the redeemer is cited is not only magical but also majestic.

In addition to the Corcovado Mountain, there is also the Sugarloaf Mountain that provides one with a panoramic spectacular scenic view that is sweet to the eyes and awe inspiring to the mind – a must see once in Rio!

The markets in Brazil vary in size and extravagance as well as products and produce that one will find on display. There is an excellent and wide range of inexpensive selection of cuisine, arts and crafts, antique items, leather goods, carvings, paintings, handicrafts, and traditional love potions, among others are all available in Sao Paulo as well as other cities.

Now, if one is interested in wildlife or ecotourism there is no better place to go than Brazil. There is the Amazon rain forest and the Pantanal, a natural region covering the world’s tropical wetland area. They both provide one with one of the richest and most diverse natural wild life, one will ever see.

The Municipal Theatre of Rio de Janeiro, located in the city center, is one of the most beautiful and important theatres in the country. Although the theatre has lost its impact and the intensity of former years it continues to feature performances by renowned symphony orchestras and operas.

Nightlife in Rio is like no other and is difficult to beat. It’s nothing but bacchanal from nightfall until you say when. It’s a carnival of fun filled indoor and outdoor festival of music of all genre, dancing, partying, drinking, and smoking that push entertainment to its limit.

The sprawling and lovely beaches are always decked with some of the most beautiful women in the world which makes the scene not only mind boggling but tantalizingly different from anywhere else one could choose to visit.

There is no doubt that Brazil has a lot to offer in terms of education, fun, excitement, and adventure. However, it’s important that one takes the necessary precaution by doing his or her due diligence before traveling.