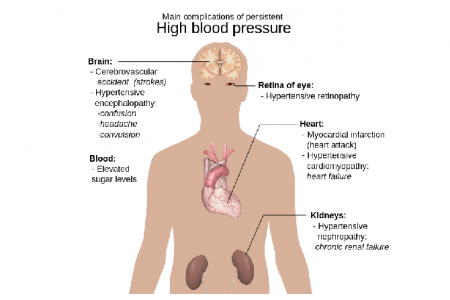 Re-known Jamaican physician, Dr. Anthony Vendryes, has called for a paradigm shift in the way high blood pressure is viewed.

Writing in his blog tonyvendryes.com, Dr. Vendryes noted that conventional medical wisdom states that 90 percent of all cases of high blood pressure is unknown and the mysterious disease is often called essential hypertension.

He further noted that doctors often declare the condition as incurable because they do not know the cause and will therefore insist on the patient taking medication indefinitely.

In his opinion, however, he said, “high blood pressure is not a disease in and of itself but rather a symptom with identifiable causes. It is most important that we address the underlying cause and not just treat the numbers on the blood pressure machine as is often practiced.”

He pointed to the fact that there is a tendency to focus on managing the problem of high blood pressure through the use of drugs rather than paying attention to the lifestyle factors associated with it such as poor diet, obesity, chronic distress, lack of exercise, smoking, among others.

He argued that blood pressure can be lowered naturally by a combination of different approaches.

First, he indicated that fixing the nutritional imbalance through the eating of fruits, vegetables, supplemented with vitamins, minerals, the omega 3 fatty acids and herbs such as garlic and hawthorn berry can be very useful.

Second, he noted that there is a link between obesity and high blood pressure but reject  the way it is treated. “I object to the all too common situation of the obviously overweight/obese individual taking lots of blood pressure medication without being on a structured weight loss program. The Cellular Nutrition Program is extremely effective at correcting obesity in a healthy fashion. Moderate regular exercise will both assist in weight loss as well as lower blood press use,” he said.

Third, he said research findings on salt does not support the claim that salt is bad for you and your blood pressure. He posited the view that several different studies published in the American Journal of Hypertension found no strong evidence that a reduction in salt intake decreases the risk for heart attacks, strokes or death in people with normal or high blood pressure. Notwithstanding, he cautioned that salt should be used moderately but more importantly the aim should be achieving a balance between magnesium, potassium and sodium.

Fourth, he highlighted the fact that part of the side effects of many medicines is an increase blood pressure. He listed some of these as antidepressants, birth control drugs, steroids like prednisone, and nonsteroidal anti-inflammatory agents commonly used as painkillers and decongestants found in cold, flu and sinus medicines.

Sixth, sleep he believed is critical as good quality and quantity sleep is vital for the hormonal balance as well as rejuvenation of the nervous system.

Seventh, he further said that medical research continues to discover more and more benefits of Vitamin D. Research has shown that the lower one’s level of Vitamin D is the greater the risk of high blood pressure. A daily sunbath and/or a vitamin D supplement he believed could be the missing link in one’s hypertension control program.

Eight, he added that the use of drugs is a last resort for him. He also made the point that there is a long list of drugs that is used to treat high blood pressure and the ones prescribed by doctors are often influenced by drug companies hype rather than by scientific rationale.

Finally, he concluded that research has shown that cheap, traditional diuretic (water tablets) are more effective than the premium priced drugs like the calcium channel blockers, Norvasc or the ACE inhibitors such as Enalapril at lowering blood pressure.

He also bemoaned the fact that doctors have ignored the important messages from research regarding high blood pressure. “Researchers have conservatively estimated that the United Kingdom could save $100 million per year and the US between $500 million and $1 billion per year if physicians stuck to the cheaper therapies for hypertension…,”