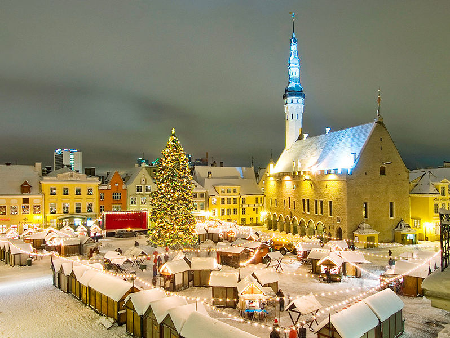 You might want to spice things up this Christmas by stepping out of those familiar surroundings and finding your way to one of many fabulous Christmas markets that adorn various parts of Europe.

Besides the obvious benefit of affording you the chance to get some cool stuff, there is also the added perk of mingling with the locals and finding your way around the brimming festive stalls, treating yourself to some of the finest wines while having Christmas carol singers soothe you with harmonious melodies.

So perhaps it’s time to take that ‘mini-festive’ break and grab some cool and extraordinary packages from some of the most amazing Christmas shopping markets in Europe.

Tuscany, Italy, is home to the Medieval town of Montepulciano which plays host to an annual free-entry Christmas Market. This market is set up in the Piazza Grande and its environs, featuring over 70 wooden huts selling all kinds of stuff such as traditional crafts, sweet treats, Christmas decorations, and leather goods.

A carousel and a mini ranch with ponies can also be found around the market.

And, it gets even more fascinating when you check out the Castle of Santa Claus which was whipped up from what used to be known as the Poliziana Fortress.

This is also a paradise for kids. Besides getting to meet Santa, they can all participate in fun activities and interactive shows.

There is also the garden of the fortress which has an ice-skating fort.

Moreover, if you are wary about accommodation, this Christmas market has got you covered as the Cignella is just 20 minutes away.

This is one of Europe’s most bustling Christmas markets attracting nearly half a million visitors yearly. Full of festive cheer, the market which is sited opposite the famous Winchester Cathedral, boasts over 100 chalets featuring sales of several festive delights including mulled wine, mince pies, stolen, and bratwurst.

At the onset of twilight, the market is quite the view as the overlooking cathedral casts a beautiful glow over the market’s grounds. Also featured is an ice rink with a gigantic Christmas tree highlighting the center.

Tallinn could be thought of as just another ancient town with rich history until it’s Christmas time when it morphs into something of a haven for shopping. Here you can get an assortment of handicrafts, toys, sheepskins, handmade jumpers, felt hats, and traditional Estonian cuisine.

During the yuletide, the market is abuzz with music as carol singers render their melodious tunes for the entertainment of shoppers.

At this time of year, temperatures linger around zero, and this creates quite the view as the tall spires in the city, and medieval houses create a frosty, white-tinged setting.

This Christmas market is considered one of the oldest in Germany and is renowned for its Stollenfest. The Stollenfest is what Germans call a Christmas cake made with fruit and marzipan.

In this market, bakers’ trip over themselves to bake some of the world’s biggest Christmas cake. This massive cake which usually weighs up to four tonnes is then served to the public, and that’s after hundreds of pastry chef take the cake on tour around the old town.

And you can also buy lots of cool stuff like glass art from Thuringia, nutcrackers, and ceramic brought from Upper Lusatia to the market.

Don’t we all love Christmas? Well, maybe not as much as the Finns. And Tuomaan Market is one of Finland’s hottest Christmas spots. It is the oldest and most significant event of its kind in all of Finland.

Okay, there is a good chance of the whole city being blanketed by a thick cover of snow, but this makes the view even more alluring as the twinkling lights which float above Aleksanterinkatu create quite the spectacle. Aleksanterinkatu is the official Christmas street of Helsinki. These lights are featured as a long-standing tradition which debuted in 1949 as a symbol of hope post World War Two.

Here you can get both crafted gifts and locally-grown produce, fish, meats, and an assortment of Finnish cuisine. Kids can also get some fun off the traditional merry-go-round which gives free rides.