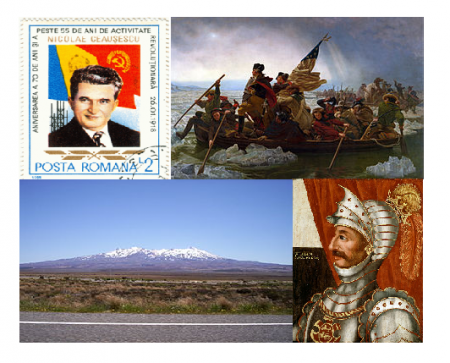 For most, Christmas is a sacred day of peace and good will. However it’s also been a day for some historic events throughout history. Here are just a few in chronological order:

After defeating Harold at the Battle of Hastings, French born William the Conqueror was crowned King of England at Westminster Abbey.

After setting sail from Spain, Columbus’ slowest ship the Santa María de la Inmaculada Concepción, ran aground off the coast of Haiti. It seems that the crew fell asleep after enjoying some festivities and left the cabin boy to steer the ship.

George Washington, in an effort to catch the Hessians off guard, crossed the Delaware River and crushed the mercenaries.

After the Civil War, those who fought on the side of the South were considered war criminals. However, despite major opposition, President Andrew Johnson granted amnesty to all of them.

During WWI, the Germans and the Brits held a temporary truce where both sides sang carols, exchanged greetings, and gifts. There is even a picture of both sides decorating a Christmas tree.

Emperor Hirohito of Japan was crowned emperor and served for 63 years, which is the longest reign in Japanese history. He approved the attack on Pearl Harbor which led to the U.S. response of bombing Nagasaki and Hiroshima.

After it had erupted in 1945, no one really paid attention to Mt. Ruapehu after that. By 1953, the Crater Lake was at a much higher level than it was in 1945 and the debris that held in the water back collapsed. That triggered a deadly overflow that killed 151 people. Queen Elizabeth II and Prince Phillip were in New Zealand at the time and attended the state funeral of 21 unidentified victims.

Charlie Chaplin was an icon in silent movies, known for the classics, ‘The Great Dictator’, ‘The Tramp’ among others. He was loved by many and has inspired generations of actors and comedians. The Briton died at his home in Switzerland at the age of 88.

For nearly a quarter of a century, Ceausescu had Romania in a stifling communist grip. During his final speech, the crowd turned against him and his family. They fled but were captured, tried, found guilty and executed all on Christmas Day. That ended communist rule in Romania.

Since the Glasnost policy granted more freedom and transparency that led to the end of the USSR. On Christmas 1991, its chief architect resigned as President of the former USSR which was broken up into sovereign republics.