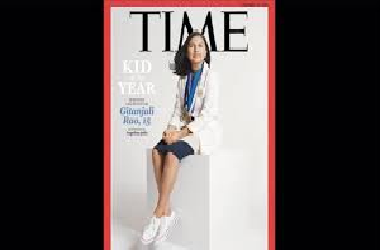 Time magazine named 15-year-old Gitanjali Rao, a Colorado teenager who invented a mobile device to test for lead in drinking water, among other inventions as Time’s Kid of the Year for 2020.

The magazine announced the award recently, citing Rao’s ability to apply scientific ideas to real-world problems — and her desire to motivate other kids to take up their own causes.

“I am so humbled and so grateful for this opportunity,” Rao said in a press report.

“It’s so honoring and humbling to be among so many fantastic people who have appeared on the cover of Time magazine, but along with that, just to be among the fantastic ‘Kid of the Year’ finalists as well.”

The Colorado teen was selected from a group of over 5,000 nominees ranging from the ages of 8-16.