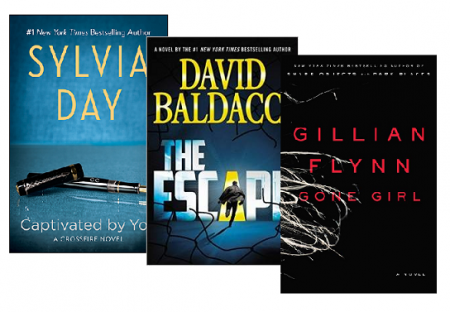 1. CAPTIVATED BY YOU, by Sylvia Day. (Berkley.) Eva and Gideon’s love is threatened by old wounds; a Crossfire novel.

2. THE ESCAPE, by David Baldacci. (Grand Central.) John Puller, a special agent with the Army, hunts for his brother, who was convicted of treason and has escaped from prison.

3. GONE GIRL, by Gillian Flynn. (Crown.) A woman disappears on the day of her fifth anniversary; is her husband a killer?

4. GRAY MOUNTAIN, by John Grisham. (Doubleday.) A downsized Wall Street lawyer joins a legal clinic in a small Virginia town and becomes involved both in real people’s lives and in litigation against the coal mining industry.

6. THE CINDERELLA MURDER, by Mary Higgins Clark and Alafair Burke. (Simon & Schuster.) A TV producer plans a show about a cold case — the murder of a U.C.L.A. student who was found with one shoe missing.

7. REVIVAL, by Stephen King. (Scribner.) The continuing relationship over five decades between a disgraced clergyman and a drug-addicted musician whom he mentored as a boy.

8. THE MISTLETOE PROMISE, by Richard Paul Evans. (Simon & Schuster.) A divorced woman enters into a contract with a strange man to pretend to be a couple until Christmas.

10. FLESH AND BLOOD, by Patricia Cornwell. (Morrow/HarperCollins.) As the Boston Marathon trial approaches, Dr. Kay Scarpetta, the chief medical examiner for the state of Massachusetts, pursues a sniper who may be a vigilante; the 22nd Scarpetta novel.