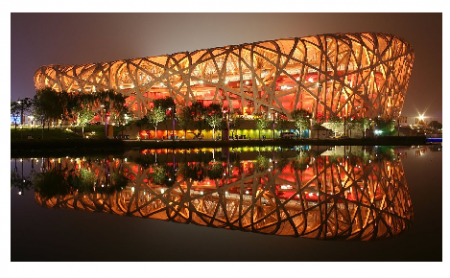 The Bird’s Nest Stadium in Beijing, China is where Bolt first set the track on fire with his lightning speed at age 21 winning the 100m and 200m before anchoring the Jamaican 4x100m relay team to glory.

“Beijing was where it all started for me at the Olympic Games in 2008; I have great memories of this city and the stadium.  It’s great to be back here, I’m looking forward to getting on the track on Saturday,” Bolt told the press.

He also said he has been training hard these past few weeks to put himself in the best possible condition to run well and defend titles over the next week.

“Everyone knows that the Championships are the most important for me.  That is what I train for.  The one-off races are important but the medals and titles are given out at the Championships.  My racing season wasn’t ideal this year but I have great confidence in my coach and his ability to get me into shape at the right time,” Bolt reportedly said.

There was wide speculation earlier on whether Bolt would defend his 100m title or even show up at the 15th IAAF World Championships scheduled to start on Friday.

“I don’t know why people would think that and I wouldn’t come (to Beijing),” Bolt told reporters.

“If I didn’t plan (to run the 200m) that would be announced from early and someone would have replaced me,” he added.

“I’m not one of those type of people who would come to a championship and then not show up to run a race and as you know the 200m is my favorite event so if I wasn’t going to run any race it would be the 100 meters,” he continued.

Bolt remains confident and upbeat despite the performance of his arch American rival Justin Gatlin who leads during the season in both sprints with world leads of 9.74 and 19.57.