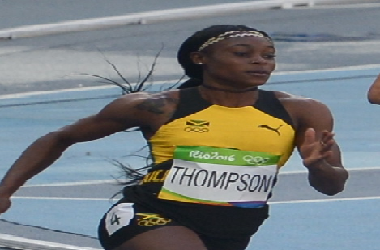 The quote in the foregoing is that of the world’s greatest boxing legend Muhammed Ali, but it could have very well come from the lips of Jamaica’s double Olympic champion Elaine Thompson-Herah.

And in the words of former pop star Michael Jackson — she could now say, “I am bad!”

Thompson-Herah turned up the heat at the Prefontaine Classic, Wanda Diamond League meet in Eugene, Oregon, on Saturday to confirm her status as one of the world’s greatest track athletes.

The Jamaican was in a no-nonsense mood when she easily dismissed a top-quality field to stop the clock at 10.54, just .05 second outside of the world record set by the United States’ Florence Griffith-Joyner in 1988 and bettering her personal best time set at the recently held Olympic Tokyo Games.

The American upstart and flamboyant sprinter Sha’Carri Richardson who failed to make it to the Tokyo Olympics because of a 30-day ban after testing positive for a chemical found in marijuana after her victory in the 100-meter finals at the Olympic trials on June 19, got the opportunity to match her skills against some of the Olympic athletes.

However, the American sprinter did not live up to expectations and bombed-out last, running a slow time of 11.14.

In a post-race interview with NBC, Richardson said, “It was a great return back to the sport.”

She said further, “I wanted to be able to come and perform having a month off. … Not upset at myself at all. This is one race. I’m not done. You know what I’m capable of.”

The fact of the matter is that Thompson-Herah had the last say, and fans will continue to expect great things from her going forward.