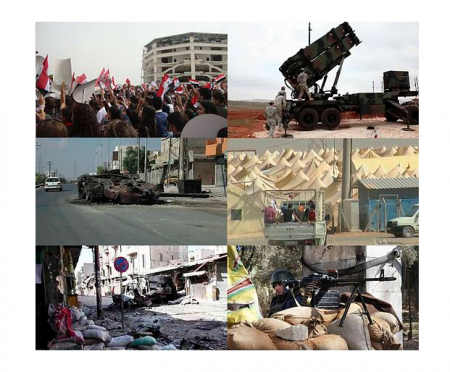 Syria is located in Western Asia, bordering Lebanon and the Mediterranean Sea to the West, Turkey to the North, Iraq to the East, Jordan to South, and Israel to the Southwest.

Its population is made up of diverse ethnic and religious groups that include, Arab Alawites, Arab Sunnis (majority), Arab Christians, Armenians, Assyrians, Druze, Kurds, and Turks.

The country has been embroiled in a civil war since March 2011, a conflict directly linked to the mass movement of revolutions and protests in the Arab world where people are demanding radical reform in the structure and system of their government.

However, the Bashar Assad led government has cracked down heavily against protestors through the use of its Army. This has led to the death of thousands of innocent people, millions of refugees in neighboring countries, the defection of some leading members of the army, formation of the fighting units referred to as the Free Syrian Army and the Syrian National Coalition, an alternative government in waiting.

Now, the Syrian government has been accused of using chemical weapons against its civilian population. This has invoked the wrath and a loud out cry from several world leaders including the United States.

Consequently, there are now plans afoot by a few countries, led by the U.S. to use military actions to punish the Syrian government.

So, what are the views of netizens regarding the conflict military action against the Assad’s regime?