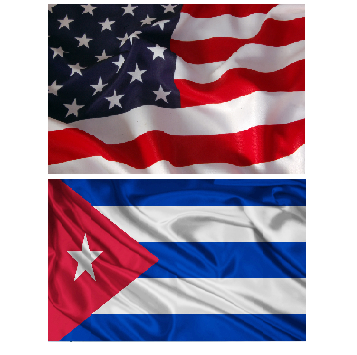 Next month, it will be the first visit of a U.S. president to Cuba in nearly 90 years.  And it builds on the decision I made more than a year ago to begin a new chapter in our relationship with the people of Cuba,” he said.

The President posited that the best way to advance American interests and values, as well as to help the Cuban people improve their lives, is through engagement—by normalizing relations between both governments and increasing the contacts between both peoples.

Furthermore, he said that change will not come to Cuba overnight.  But as the country opens up, it will mean more opportunity and resources for ordinary Cubans. He also noted that progress could already be seen.

He said, “Today, the American flag flies over our embassy in Havana, and our diplomats President Obama in the opening of his weekly address noted that he wanted to make it officially known that he will be going to Cuba.

“When Michelle and I go to Havana are interacting more broadly with the Cuban people.  More Americans are visiting Cuba than at any time in the last 50 years—Cuban-American families; American students, teachers, humanitarian volunteers, faith communities—all forging new ties and friendships that are bringing our countries closer.  And when direct flights and ferries resume, even more of our citizens will have the chance to travel and work together and know each other.”

He argued that American companies were beginning to do business in Cuba, helping to nurture private enterprise, and giving Cuban entrepreneurs new opportunities.

He further stated that with new Wi-Fi hotspots, more Cubans are starting to go online and get information from the outside world.

“In both our countries, there’s overwhelming support for this new relationship.  And in Cuba today, for the first time in a half century, there is hope for a different future, especially among Cuba’s young people who have such extraordinary talent and potential just waiting to be unleashed,” the President said.

He said his visit will be an opportunity to keep moving forward and he’ll meet with President Castro to discuss ways to continue normalizing relations, including making it easier to trade and easier for Cubans to access the Internet and start their own businesses.

He further said he will speak candidly about the serious differences with the Cuban government, including on democracy and human rights and will also reaffirm that the United States will continue to stand up for universal values like freedom of speech and assembly and religion.

The President stated, “I’ll meet with members of Cuba’s civil society—courageous men and women who give voice to the aspirations of the Cuban people.  I’ll meet with Cuban entrepreneurs to learn how we can help them start new ventures.  And I’ll speak directly to the Cuban people about the values we share and how I believe we can be partners as they work for the future they want.”

He argued that both countries are in the early days of their new relationship and the transformation will take time.

He said however that he is focused on the future and is confident that his visit will advance the goals that guide us—promoting American interests and values and a better future for the Cuban people, a future of more freedom and more opportunity.