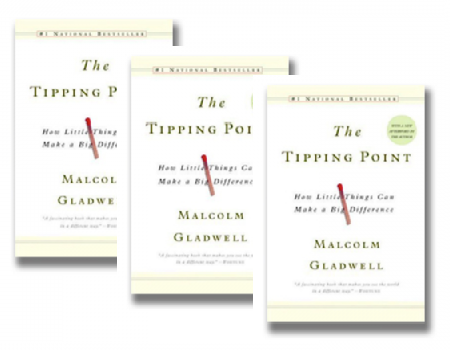 Malcolm Gladwell is a bestseller writer. In his book, The Tipping Point, he seeks to bring to the fore in a very interesting, fascinating, and intriguing way the social dynamics at play in regards to human behavior.

The book is premised on the concept that little things can happen to trigger major changes. Gladwell examines the link between social behavior and epidemics. He posits the view that when an epidemic tips out of balance it does so because something has happened or some change has taken place. This he attributes to three principles, namely: the Law of the Few, the Stickiness Factor, and the Power of Context.

First, in his account of the law of the few, Gladwell refers to data from several different sources to show how the behavior of a few people could cause a chain effect that ultimately impacts the broader population. He argues that ideas, products, messages, and behaviors spread in a similar way to viruses. He buttresses this view by citing three categories of people that play an integral role in the social epidemic process. One, Connectors – people with special gift in bringing people together. Two, Mavens – those who like to accumulate knowledge and help people. Three, Salesmen – a select group of people with the power of persuasion.

Second, he further argues that information packaged under the right circumstance can make it irresistible. This he calls ⎯ the Stickiness Factor. He cites several studies involving the television programs, Sesame Street and Blues Clues to illustrate the point that minor changes in presentation and structuring can impact messaging to the extent that it sticks.

Third, the power of context, according to Gladwell, people are conditioned and influenced by the environment in which they find themselves. He uses the Broken Windows theory as a point of reference to support his idea. This theory, developed by two criminologists, holds that “if a window is broken and left unrepaired, people walking by will conclude that no one cares and no one is in charge. Soon, more windows will be broken and the sense of anarchy will spread from the building to the street on which it faces, sending a signal that anything goes.” He purports that the application of this theory benchmarked actions taken by government officials in New York to arrest the high level of criminal behavior that once existed on the subway trains as well as in the wider communities in the city.

Added to this, Gladwell discusses what he calls the rule of 150, that is, the maximum number at which social groups can be managed most efficiently as well as the size at which meaningful and effective relationship can be established.

Finally, Gladwell uses many other examples, situations, and case studies in the last two chapters of the book to reinforce the tipping point concept – that one dramatic moment in which everything changes. ∅